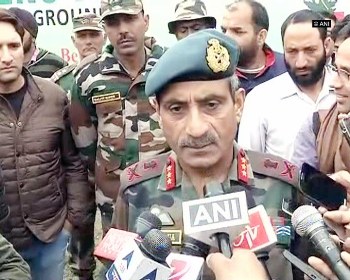 Srinagar: In what can be termed as a stunning revelation, it has come to the fore that terrorist infiltration at the border is far serious than we all thought it was.

The General Officer Commanding (GOC) of Srinagar based 15 Corps, Lieutenant General Satish Dua, on Monday said that over three hundred militants are waiting at the launch pads near the Line of Control (LoC) to infiltrate.

“I don’t think the intent of infiltration has been decreased from their part because we are continuously getting inputs that more than three hundred terrorists are waiting at the launch pads across the Line of Control and there are a lot of pressure on them to infiltrate,” said Lieutenant General Dua.

He said the militants are finding it difficult to infiltrate due to coordinated efforts and multi-tier counter infiltration grid.

“We have been saying all along that this year infiltration has been next to nil. And it is all the efforts of our multi layered counter infiltration, which was in place.Frustrated at the attempts to infiltration and not able to succeed, sometimes they come inside just across LoC do some firing and go back,” he added.

Two army jawans were killed in a fresh ceasefire violation by Pakistani troops, ahead of Prime Minister Narendra Modi’s visit to Jammu and Kashmir on November 7.

According to army officials, the Pakistani troops resorted to unprovoked firing on the LoC in Gurez’s Eizmarg area in North Kashmir. The Pakistani troops fired at many Indian positions with light and medium caliber weapons, including rockets.