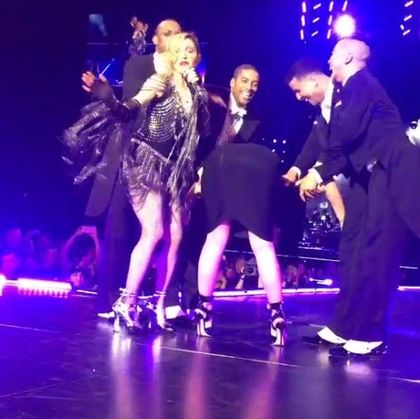 Pop star Katy Perry was hauled up onstage by Madonna as part of her birthday celebrations. The “Firework” singer turned 31 on Sunday and she celebrated over the following days with a museum trip and a dinner party at an Italian restaurant.

The Forum in Inglewood, California, and she was roped in to taking part in the “Vogue” singer’s saucy onstage segment.

After the performance, Madonna told Katy onstage, “Thanks… I know you didn’t want to come up here and do this. So generous. A big round of applause for…”

Sharing a Banana with Katy Perry‼️ Highlight of my show at the Forum! Thanks Katherine🍌🍌🍌🍌🍌 ❤️ #rebelhearttour pic.twitter.com/xtDDtEY1wM

Madonna shared pictures from the appearance on Twitter. The birthday girl reposted footage of herself busting impromptu dance moves as Madonna circles around her.