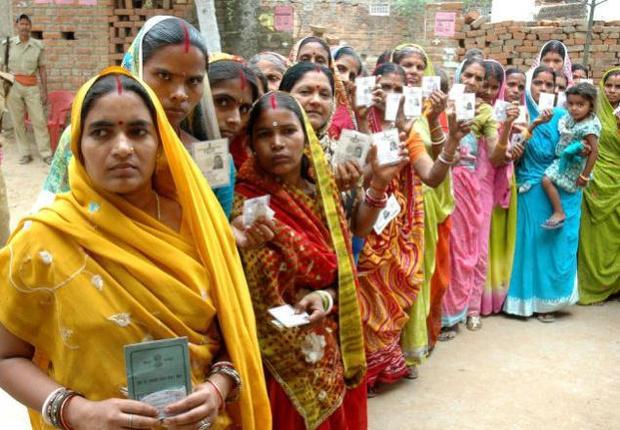 Patna:53.32% polling recorded in 3rd phase of #BiharPolls on Wednesday.

Meanwhile, a monkey creating hindrance in polling process in Bakhtiarpur (Bihar) was reported. The money bite & scared voters lined up to cast votes.

Monkey creates hindrance in polling process in Bakhtiarpur (Bihar) as it bites&scares voters lined up to cast votes pic.twitter.com/SSACh5ZovG

Earlier, 5.59% polling was recorded in first hour of third phase of #BiharPolls on Wednesday.

Polling will end at 4 pm in 10 constituencies due to security reasons and at 5 pm in the rest 40 constituencies, Additional Chief Electoral Officer R Lakshamanan said.

The former chief minister’s political turf Saran, which has 10 Assembly seats, and the seven-seat Nalanda, home district of Chief Minister Nitish Kumar, will be covered in the third phase.

All the booths are manned by central forces and live webcasting would be done from 716 polling stations.

The prominent politicians, other than the two sons of Lalu Prasad, whose fate would be decided in this round are BJP leader Nand Kishore Yadav (Patna Sahib), ministers Shyam Rajak and Shrawan Kumar from Phulwari and Nalanda seats respectively, Deputy Speaker Amarendra Pratap Singh (Ara) and BJP’s chief whip in the state Assembly Arun Kumar Sinha (Kumhrar).

As many as 1,107 companies of Central Para Military Forces and state police would be deployed on the day to ensure peaceful voting. While 50 mounted police force are deployed in general areas, 47 motor boats have been pressed into services for patrolling the riverine areas, Lakshamanan said.

Eight was with RJD of Lalu Prasad. But this time with a change in equation the scene is different.

From grand secular alliance, RJD is contesting on maximum 25 seats, JD(U) 18 and Congress 7.