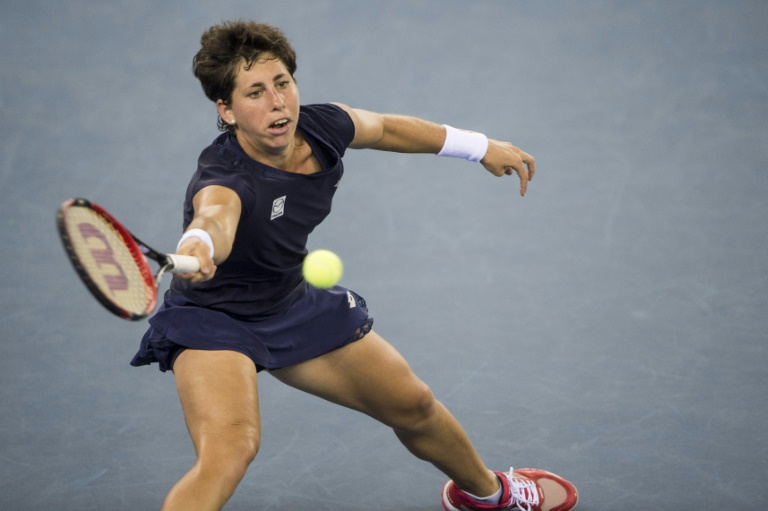 Fifth seed Carla Suarez-Navarro of Spain advanced to the Kremlin Cup quarter-finals with a straight-sets victory over Dominika Cibulkova of Slovakia on Tuesday.

At the ATP and WTA joint event in Moscow, Suarez-Navarro chalked up a 6-4, 7-5 win in one hour 46 minutes to keep alive her chances of obtaining one of the remaining spots in the season-ending WTA Finals in Singapore.

“I’ve lost all of my previous meetings with her but I’ve learned from that defeats,” Suarez-Navarro said.

“Today I played tactically good game as I feel myself comfortably on this court. The key was to stay focused throughout the match.

Meanwhile, sixth seed Czech Karolina Pliskova, who needs to win the tournament to book a place in the WTA Finals, battled into the second round after a tough three-setter with Alexandra Dulghery of Romania 6-4, 5-7, 7-6 (9/7).

Pliskova, 15th in the WTA rankings, took the opening set in 49 minutes and grabbed a 3-1 lead in the second but Dulgheru rallied to take four consecutive games to level at one set all after one hour 33 minutes on court.

The deciding set looked almost a carbon copy of the second as Dulgheru was trailing 4-1 but managed to pull the scores level again.

But in a tiebreak that followed the 23-year-old Pliskova, who is seeking her career’s fifth title here, was slightly more accurate to win the set and her first ever meeting with Dulgheru.

“It was pretty tough because she was playing solid from the baseline,” Pliskova said.

“I almost died today so I’m really happy that I still have a chance to get to Singapore although I know I need to win the tournament here.”

In the ATP section the fifth seed Uruguayan Pablo Cuevas, who is seeking his career fourth title here, barely broke sweat as he cruised into the second round when the Spanish qualifier Pere Riba retired through injury after losing the first set 6-1.

“I’m happy to proceed to the second round even though it has happened because of my rival’s retirement,” Cuevas said.

“But I was pleased with my play during that small time that I’ve spent on court here and I hope to continue to play like that in the next round.”