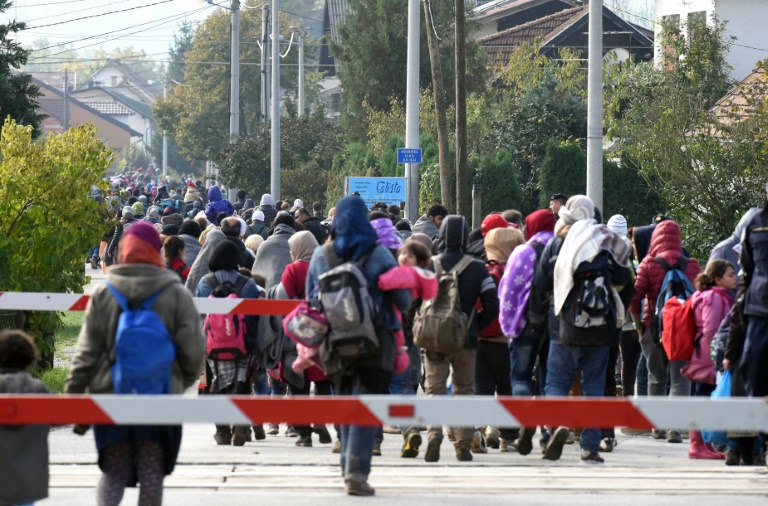 Slovenia on Tuesday called in the army to help it manage a flood of refugees seeking to reach northern Europe ahead of winter, as the small EU state became the latest trouble spot on the migrant trail.

With at least 9,000 people landing on Europe’s beaches every day, there appeared to be no end in sight to the continent’s biggest migration wave since World War II.

But a vaunted European Union (EU) scheme for relocating 160,000 asylum seekers around the bloc has made no progress, an EU source said.

Since Saturday when Hungary sealed off its border with Croatia, more than 19,460 migrants have arrived in Slovenia, with the nation of two million people warning it was struggling to cope.

“The inflow of migrants over the last three days has exceeded all manageable possibilities,” the Slovenian government said.

“The last 24 hours have been the toughest and most demanding since the start of the crisis,” it said, warning it was “delusional” to expect small countries to succeed where larger ones had failed.

Parliament will be asked to approve legislation allowing soldiers to intervene in the crisis “under very specific circumstances,” the government said.

Under current law, the army can only provide technical and logistical support.

However, “this does not mean a state of emergency,” Prime Minister Miro Cerar told journalists.

In Greece, the crisis showed no sign of abating with a clear “spike in arrivals” that left 27,500 people packed on the Greek islands by Tuesday morning, the UN said.

More than 600,000 migrants and refugees, mainly fleeing violence in Syria, Iraq and Afghanistan, have braved the dangerous journey to Europe so far this year.

The trip which most have made on inflatable boats from Turkey to Greece has left over 3,000 dead or missing.

The goal for many is the EU’s biggest economy Germany, which expects to take in up to a million refugees this year.

Last month, the EU announced plans to relocate 120,000 asylum seekers from overstretched frontline states Italy and Greece by means of a compulsory quota system that was fiercely opposed by some eastern members of the bloc.

The plan requires most of the 28 member states to accept a share of 160,000 people from the two Mediterranean nations over two years.

But an EU source said the scheme has barely got off the ground.

So far only 19 Eritrean asylum seekers have been relocated from Italy to Sweden although another 100 people are due to be flown to other cities in the coming days.

“With the relocation of around 100 people this week from Italy, the available places will be almost exhausted while the number of applicants is increasing,” the source said on condition of anonymity.

“There will be a bottleneck if member states don’t pledge places like they said they would.”

Out of the 23 member states that are legally required to admit a share of the human burden, the source said only six have offered immediate places so far — Austria, France, Germany, Luxembourg, Spain and Sweden.

Member states have also been slow to follow up with promised financial help — out of the 2.8 billion euros pledged at an emergency EU summit on September 23, only about 474 million euros ($538 million) has materialised.

In a related development, the EU’s border agency said member states had provided less than half of the personnel it had requested to help out in overstretched locations in Greece and Italy.

Earlier this month, the agency said it needed 775 more border guards to help out along the bloc’s frontiers, but so far member states have only offered to provide 291.

Meanwhile on the ground, thousands were left stranded in wet, freezing weather on Croatia’s frontier with Serbia, after travelling up through Greece and Macedonia.

Around 1,000 were waiting to cross into Croatia at the Berkasovo checkpoint after spending the night in the cold, with dozens of tents pitched along the roadside which was turned into a mudbath after hours of heavy rain.

“Open! Open!” chanted the crowd as border guards limited the flow to only 50 people in every half hour.

“It is so cold. We couldn’t sleep. I came 24 hours ago and spent the night in a tent,” said Syrian Azme Solei who said he had spent a year living in a refugee camp in Turkey but decided to leave because of the “unbearable” living conditions.

“I would like to go to Norway as I heard they behave nice towards refugees there,” he said.