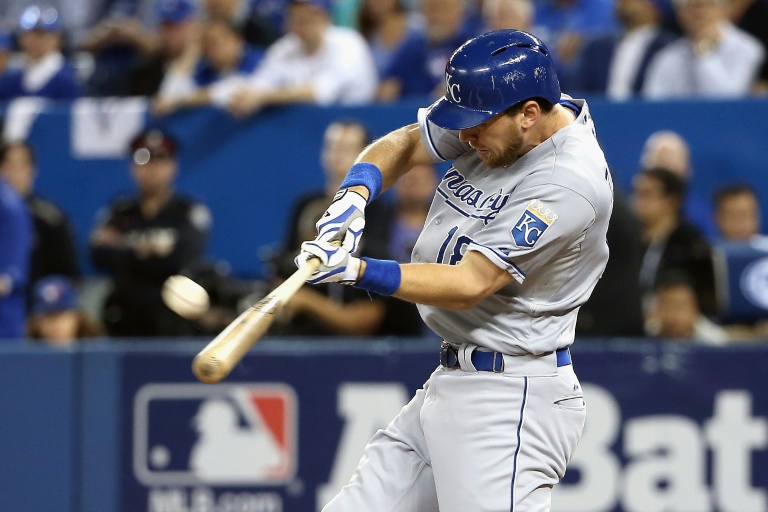 The Kansas City Royals moved to within one win of a place in the World Series after crushing the Toronto Blue Jays 14-2 to take a stranglehold on the best-of-seven series.

The Royals, trying to get back to the World Series a year after falling to the San Francisco Giants in baseball’s championship showcase, took a 3-1 lead in the American League Championship Series.

Stung by three Toronto home runs in an 11-8 loss on Monday, the Royals raced to an early lead against Blue Jays starting pitcher R.A. Dickey.

Four runs, highlighted by Ben Zobrist’s two-run home run, were the most scored in the top of the first inning in an American League Championship Series game.

The Royals also scored four runs in the seventh inning and three in the eighth, finally tacking on two in the ninth on the way to the rout, which left Toronto battling to stay alive when they host game five on Wednesday.

“Not a more important game this season, really,” Blue Jays manager John Gibbons said of Wednesday’s must-win. “I know these guys will be ready.”

The winner of the series will meet either the New York Mets or Chicago Cubs in the World Series starting on October 27.

“We feel good,” Royals manager Ned Yost said. “We like the way we’re playing right now. Our offense has been really, really good.

“We have (Edinson) Volquez coming back tomorrow, our defense is always spectacular, and our bullpen is primed to go tomorrow, too.”

Yost said he didn’t believe much in game-to-game momentum. But after scoring four runs in the ninth-inning of Monday’s defeat, Kansas City came in hot on Tuesday.

Alcides Escobar laid a bunt down the third-base line for a leadoff base hit, becoming the first player to lead off the first inning with a hit in each of the first four games of an LCS.

Zobrist deposited the fourth pitch of the contest into the right-centerfield seats for a 2-0 lead.

Lorenzo Cain then drew a walk and advanced to third on Eric Hosmer’s single, dashing home on a passed ball by Blue Jays catcher Russell Martin.

The “safe” call on Cain withstood a Toronto challenge, and Mike Moustakas plated another run with a sacrifice fly.

Alex Rios made it 5-0 for the Royals, leading off the second frame with a home run off knuckleballer Dickey, who lasted just 1 2/3 innings.

“You get to this point and what you need are guys to get hot and they have,” Yost said in assessing the top of his batting order. “They’ve been table setters. They’ve been run producers. It’s been fun to watch them go to work every day.”

The Blue Jays trimmed the deficit with two runs in the third, but the Royals nabbed another four runs in the seventh inning, making the most of three hits and two sacrifice flies as well as a wild pitch from Toronto reliver Ryan Tepera to stretch the lead to 9-2.

“It was ugly today, no doubt about that,” Gibbons said of his pitching staff’s inability to keep the Royals in check. “That’s all I can say.”

The Royals added three runs in the eighth, and with two outs in the ninth the reeling Blue Jays brought infielder Cliff Pennington in to pitch.

It was a first for a true position player in a major league playoff game, but Gibbons said he only made the unorthodox move to ensure his top late-game pitchers would be fresh enough to make a difference on Wednesday.

Pennington gave up a single to Paulo Orlando and a two-run single to Escobar, who finished with four runs-batted-in.