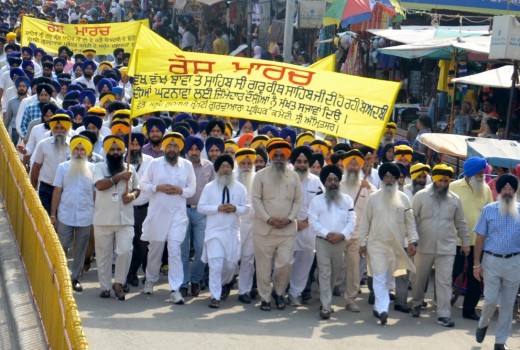 Netizens are strongly criticising and raising voice against the desecration of the Guru Granth Sahib, reports of which are now coming in from various parts of the state, across all social media platforms.

Amid updates of blockades and protests in different parts of the city, many WhatsApp groups are sending and receiving appeals for peace.

Across social media platforms, most of the Sikh supporters displayed black flags as their profile pictures to express their resentment over the incident. The black flag has quotes inscribed in Punjabi such as “Mein Guru Granth Sahib Ji di beizzati de ros wajon aaj jhanda laayea hai “(I have put up this black flag in a protest against the insult to Guru Granth Sahib Ji). While some pictures simply read, ‘Ros’(anger) other like,”main Kotkapura kaand wich Sikhan te hoi Tashadud da virodh karda haan” (I protest against the atrocities on Sikhs in Kotkapura incident), openly criticised the ghastly act. 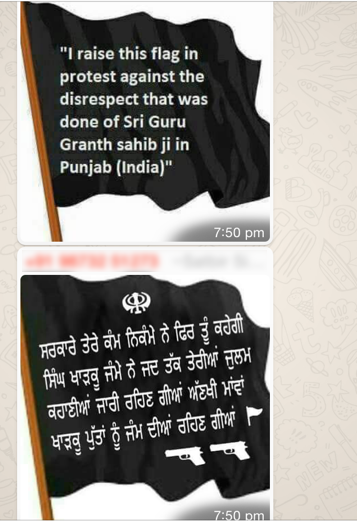 In some of the Facebook posts, the people also strongly condemned the Badal government for its inability to control the situation.

Many messages come with the demand that the conspiracy behind recent incidents of desecration should be exposed at the earliest so that Punjab is not again pushed into days of militancy.

The social media is also being used to counter rumour-mongering on certain WhatsApp groups. For instance, on Sunday evening, two messages were circulated to inform people that reports of imposition of curfew in Amritsar were false and there was no all-India bandh call given by Sikh organizations.

Through the messages on Facebook and WhatsApp, support is being mustered for the protestors and more and more people are being asked to join the protest.