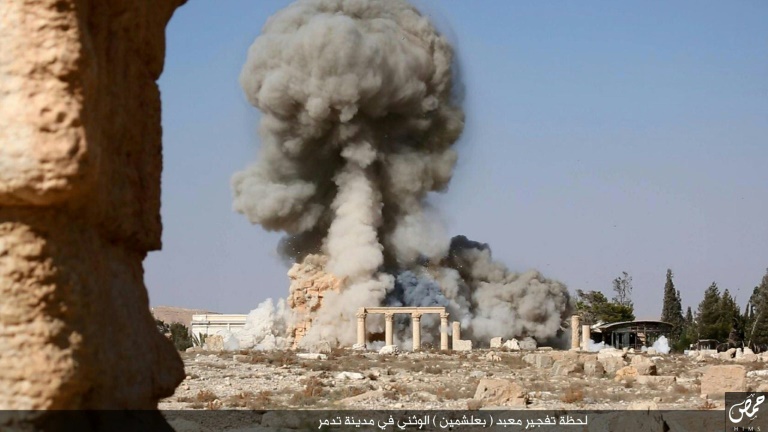 The Islamic State group may dominate headlines about the destruction of heritage sites in Syria, but it is far from the only culprit, new US research warned Wednesday.

The Syrian regime, Kurdishand other opposition forces are also major players in the destruction, according to the study led by a specialist in Middle East archaeology at Dartmouth University.

The findings, published in the journal Near Eastern Archaeology, are based on analysis of satellite imagery from nearly 1,300 out of Syria’s estimated 8,000 archaeological sites.

Media attention “has led to a widespread misunderstanding that ISIS is the main culprit when it comes to looting,” said Jesse Casana, associate professor at Dartmouth, using another acronym for the IS group.

“Using satellite imagery, our research is able to demonstrate that looting is actually very common across all parts of Syria.”

The research found that more than 26 percent of sites were looted in regions held by Kurdish or other opposition groups.

Around 21.4 percent of sites were looted in IS-controlled areas and 16.5 percent in Syrian regime areas.

But while minor looting was most common in Kurdish and opposition-held areas, IS dominated when it came to heavy destruction, the study found.

“To the best of our knowledge, the sites that were within ISIS-held areas now have a much higher incidence of moderate or severe looting than sites we have sampled in other places, and a much lower incidence of looting overall,” Casana told AFP.

“ISIS is terrible, awful,” he said. “On the other hand, looting on an equally large scale is taking place at a large number of sites all across Syria.”

Episodes of severe looting have been perpetrated under the direct watch or perhaps by the Syrian regime military and not been widely reported, Casana told AFP.

IS has carried out a sustained campaign of destruction of heritage sites in Syria and Iraq, most notoriously dismantling the ancient ruins of Palmyra since capturing the area in May.

In September, CBS News reported on smugglers selling looted artifacts to help fund IS, including a mosaic purportedly dug up in the Roman city of Apamea in western Syria.

– War problem, not IS problem –

But Casana said Apamea was first looted by the regime military.

Satellite images indicate that the looting began in 2012 after Syrian forces moved in, and that the most extreme phase took place in the government-administered portion of the site.

“The US military could wipe all of ISIS off of the map, but it will not stop looting,” Casana told AFP. “It’s a war problem, not an ISIS-specific problem.”

Casana said he worked in Syria on excavations before the war, and embarked on the research just over a year ago using a US State Department grant.

He now plans to widen the focus of his research to other sites in Syria and extend it to northern Iraq.

“I think that knowing about what’s going on in the course of this conflict is important,” he said.

“I just really wanted to do something. I worked in Syria a long time, I know many people there — using imagery to monitor it I feel at least it’s not susceptible to propaganda.”