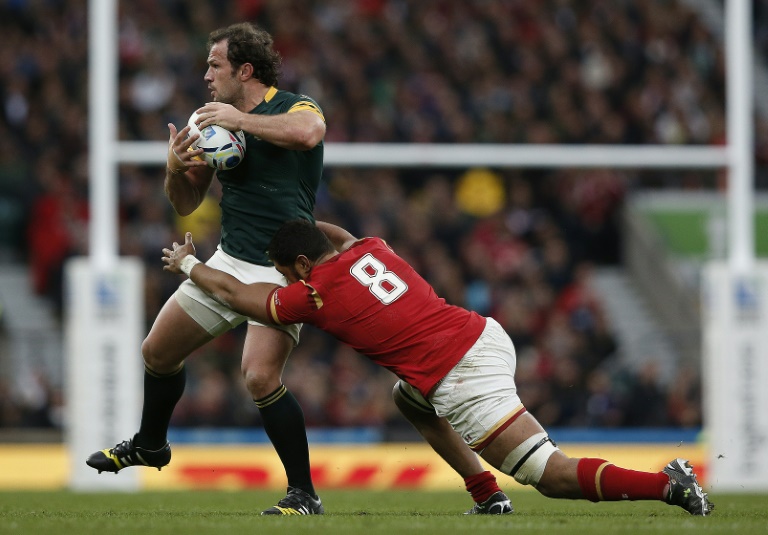 South Africa hooker Bismarck du Plessis has been included in an unchanged starting line-up for their World Cup semi-final against New Zealand at Twickenham on Saturday.

Du Plessis had been doubtful after having his hand ‘studded’ accidentally by team-mate Francois Louw during South Africa’ 23-19 quarter-final win over Wales at Twickenham last weekend.

But he was named in the 1st XV announced by coach Heyneke Meyer at the Springboks team hotel in Guildford, southwest of London, on Wednesday.

Meanwhile veteran lock Victor Matfield, who had been ruled out of South Africa’ last three matches with a hamstring injury after coming out of Test retirement, returned on the bench in place of Pieter-Steph du Toit.

This was the first time since November last year that Meyer has been able to name an unchanged starting team for successive Tests.

“Itâ€™s great to be able to give another run to the team that got us through to the semi-finals in the biggest Test of the year,â€ said Meyer.

â€œVictorâ€™s inclusion on the bench gives us even more experience there.

“His influence will also be pivotal against a strong New Zealand line-out.â€

“Weâ€™re playing against the defending champions and the top-ranked side in the world, but the current New Zealand side can also be regarded as arguably one of the best Test teams ever,” said Meyer.

“We have the utmost respect for their players and coaching staff and although there is an intense rivalry we actually get along very well away from the field,” he added.

â€œBut we have to believe we can beat them otherwise weâ€™ll be wasting our time on Saturday,” added the coach, whose side suffered a shock defeat by Japan in their tournament opener.

“Tests against New Zealand are very intense and the margins over the last couple of years have been small.

“Weâ€™re not expecting anything different this weekend and the self-belief is there,” Meyer said.

New Zealand, who have won seven of their last nine Tests against South Africa, were due to name their side on Thursday.