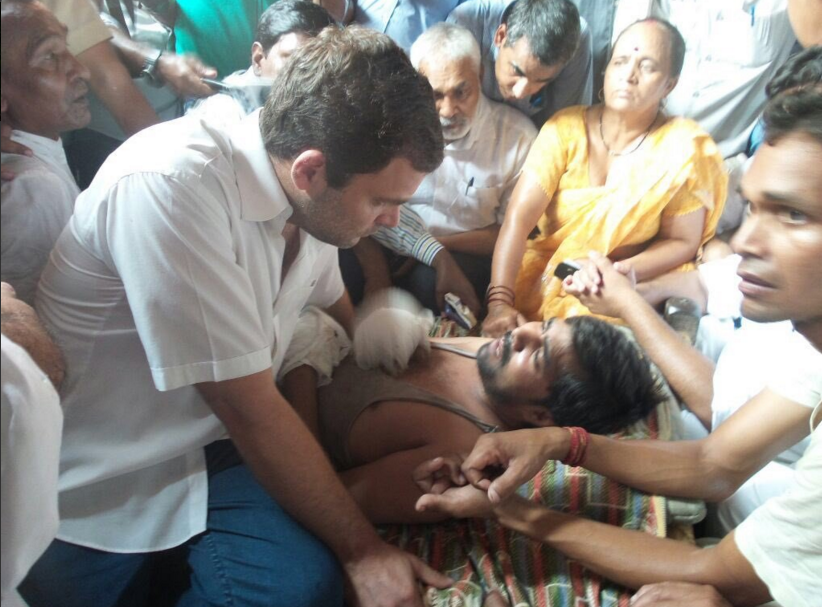 Faridabad: Haryana government after a huge protest has agreed for CBI probe into Faridabad caste violence case. The family of the Dalit children had been demanding for a CBI probe since early Wednesday.

” The case was about the enmity between two families. The CM has appealed not to politicise the issue,” PRO of Haryana CM, Amit Arya said.

Earlier, Haryana Chief Minister Manohar Lal Khattar deferred his scheduled meeting with the kin of the Dalit family which was attacked on Tuesday. Khattar called off the meeting amid protest by locals. The local administration took away the bodies of the children who were killed, after protestors placed it on the road to block it.

Meanwhile, visiting the Dalit family which lost two children in an attack by upper caste men here, Congress Vice President Rahul Gandhi accused the Prime Minister, Harayana Chief Minister, the BJP and RSS of practicising “politics of crushing” those who are weak which results in such incidents

This is an attitude shared by PM, CM & BJP-RSS-If somebody is weak,they can be crushed.What you are seeing is the result of this attitude!

They are weak and poor, that is why they are being treated like this. This is not the Government of the weak.

The father says his children were killed for no fault of their's. Their only fault is that they are poor and weak.

Gandhi also lashed out at Haryana Chief Minister Manohar Lal Khattar for ignoring the plight of the people of the state.

“The poor people are being harassed here. When they went to the administration, they were told that nobody has died yet and they should go away. Strict action must be taken against the erring police officials,” Gandhi said.

“I will help them in any way I can. They just have to speak about it,” he added.

Gandhi further said that the family members of the victims demand a CBI probe into the unfortunate incident.

The Congress vice-president later lost his cool when asked whether this was a photo opportunity.

“What do you mean by photo-op? Whenever people die, I will come again and again,” he told the media.

Seven policemen who were deployed for the security of Dalits have been suspended.

Tension gripped the locality on Tuesday after the incident. The locals on Wednesday staged protest blocking the Ballabgarh-Faridabad road. The villagers placed the bodies of the two children, who were burned to death, on the road, demanding action against the culprits.

Their children’s father, who also sustained serious burns, said that he would fight for justice. Meanwhile, the grandmother of the victims told mediapersons that they had been receiving threats for over one week.

The mother of the children is battling for life at Delhi’s Safdarjung Hospital.

A compensation of Rs. 10 lakh has been announced for the family by the Haryana government. Haryana is governed by the BJP, which also leads the ruling coalition at the Centre. Yesterday, Union Home Minister Rajnath Singh called up Haryana Chief Minister Manohar Lal Khattar and has asked him to ensure the safety of Dalit families.