Home Sports All Blacks on a wing and a prayer – and a Bus... 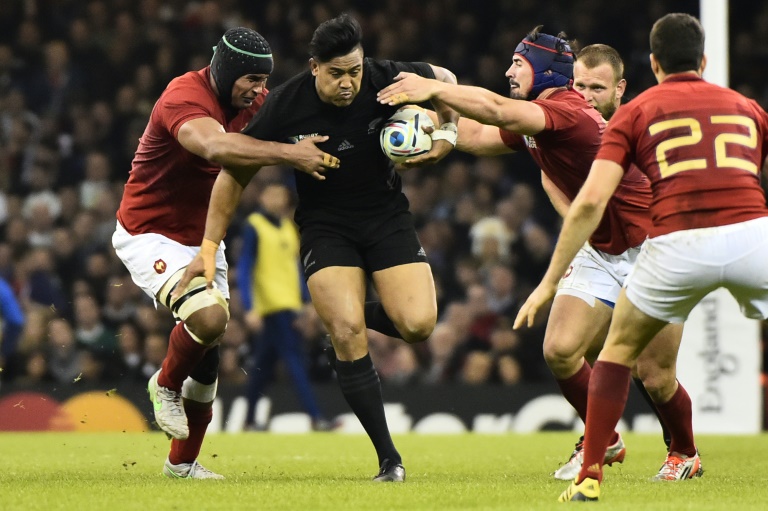 Three months ago Julian Savea could not make the All Blacks’ team. Now they are counting on the man they call “The Bus” to steamroller the defending champions into the World Cup final again.

The 25-year-old scored a hat-trick of tries against France, evoking memories of Jonah Lomu as he barrelled over rather than around French defenders in their 62-13 quarter-final rout.

“He’s a big game player and we really need another performance like that,” flanker Victor Vito said Tuesday as the All Blacks began working on strategies to beat South Africa in the semi-final on Saturday.

Speed, power and vision down the left flank and staunch under high ball, of which the Springboks will launch plenty, are what Savea brings to the table.

The quarter-final hat-trick took Savea’s tally to 38 from 39 Tests, one more than Lomu managed in 63 Tests before his legendary career was cut short by a severe kidney illness.

Springbok wing JP Pietersen, who will have the mighty task of being the first line of defence against Savea on Saturday, admits to being a fan of both monster All Blacks wings. But believes it is unfair to draw comparisons.

“I don’t think you can compare him to Jonah Lomu because Lomu did something to the game that no-one else could have done; he changed the game,” said Pietersen who has scored four tries in this World Cup compared to Savea’s eight.

“But Julian is a great player in his own way and whatever he does, he does well. He is strong in contact, good under the ball and he can also kick.”

Savea is now fifth on the list of All Blacks try scorers headed by Doug Howlett with 49. He shares the record with South Africa’s Brian Habana and Lomu for the most tries in single World Cup tournament — eight — and that could go when Habana and Savea meet on Saturday.

But at the start of the Rugby Championship, when coach Steve Hansen used an extended squad to find his World Cup ensemble of 31, Savea was on the fringes.

He committed the cardinal sin of turning up for training out of condition and was rejected for the first two games against Argentina and South Africa.

“He turned up overweight,” Hansen said when pressed on why his star wing was missing.

Three weeks of intensive running saw Savea force his way back into the line up for the final game against Australia.

Hansen was pleased. He wanted Savea back having already rated him better than Lomu.

“Jonah was a great player but I think Julian has got more to his game than Jonah,” the coach said in 2014 much to the disbelief of people who remembered Lomu at his rampaging best in the 1995 World Cup.

But there was no mistaking the similarities when Savea used his immense bulk — 1.92 metres and 107 kilograms — to take the short route to the line against France, running over Noa Nakaitgaci and Scott Spedding on the way.

Savea, a humble person, is not comfortable with the comparison.

“Iâ€™ve always said that no one can come close to Jonah, heâ€™s amazing,” Savea said.

“I watched him in every home game in Wellington running over people like little kids. Itâ€™s awesome to be compared to him but Iâ€™m just doing my job as best I can.”

Vito, who plays with Savea for Wellington and the Hurricanes, said it was no surprise to see the big wing work his way into form at the end of the year.

“He knows he probably started off a bit slower at the front end of the year but he’s massive competitor.

“He’s just gone away and worked at it and got his head in the right place and he’s back to his blockbusting best. He’s a big game player.”

As the Springboks pore of replays wondering how they can stop “The Bus” they can take heart that he has not scored against them in five previous Tests.

Lomu never managed to score against the Springboks in 12 internationals.