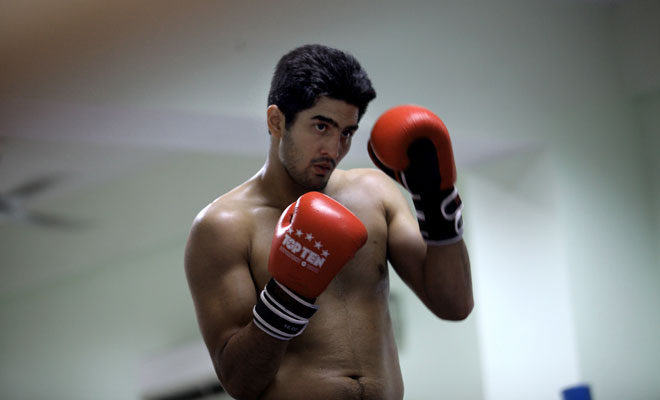 After a knockout debut, star Indian boxer Vijender Singh will face Englishman Dean Gillen in his second professional bout and the part-time firefighter has promised to be a “dangerous opponent” in the bout scheduled for October 30.

Vijender made an immediate impact in his professional debut this month when he destroyed Sonny Whiting in three rounds at the Manchester Arena.

The 29-year-old, who will be celebrating his birthday a day before his second fight, will face Nottingham’s Gillen over four rounds as he looks to claim the record of his first unbeaten pro-fighter.

The fight between Vijender and Gillen also represents a Battle of the Badges, with the Indian being a Deputy Superintendent of Police in Haryana and Gillen a firefighter serving in Nottingham.

As an amateur, Gillen’s highlight was to win the 2013 World Police and Fire Fighter Games in Belfast where he knocked out all of his opponents to claim the gold medal and now he aims to extinguish Singh’s fire in the ring.

“I’ve watched him in the Olympics and in his pro-debut, he’s a world class kid and I can’t wait to get in there and put him to the test,” the 33-year-old Gillen said.

“He’s an Olympian and that speaks for itself, he’s a hero in his country and he’s idolised by millions of people, but at some point he’ll have to get beat and that could well be his second fight against me,” he added.

Vijender is training in Manchester with coach Lee Beard as he aims to beat Gillen and stay on track to achieve his history-making dream to become India’s first ever world professional boxing champion.

“I can’t wait for this fight against Gillen, he’s talking the fight and it looks like he will bring me a challenge in my second fight,” said Vijender.

“From what I have seen of him he looks like a good opponent who will push me and I hope he does because then the better I will fight, I rise to my opponent and it brings the best out in me,” he added.