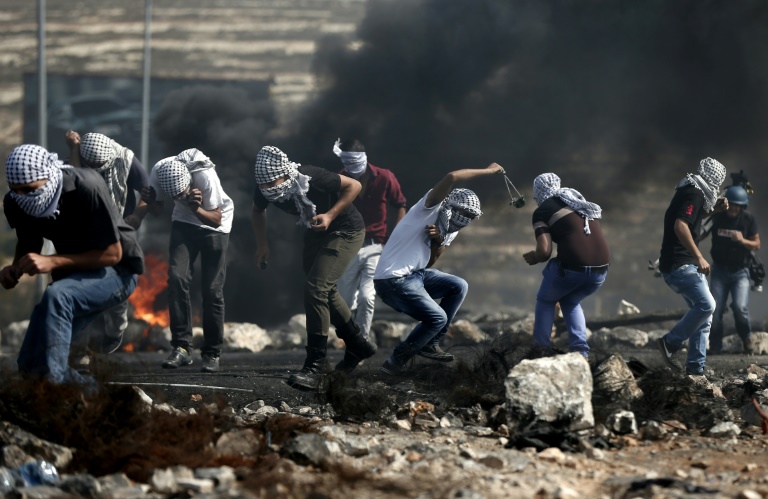 UN chief Ban Ki-moon warned Israelis and Palestinians on Tuesday they were at a “dangerous abyss” and must act quickly to calm nearly three weeks of unrest before it spirals further out of control.

The stark comments came as the UN secretary general made an unannounced visit to Jerusalem to try to ease tensions that have led to mounting international concern.

Violent protests and a wave of Palestinian gun, knife and car-ramming attacks against Israelis have raised fears of a full-scale Palestinian uprising.

Even as Ban visited, another stabbing and a car attack occurred in the occupied West Bank, wounding three Israelis. Both alleged attackers were shot dead.

Fresh clashes also erupted along the Gaza Strip border, leaving one Palestinian dead from Israeli fire and five others wounded.

“My visit reflects the sense of global alarm at the dangerous escalation in violence between Israelis and Palestinians,” Ban told journalists after meeting Israeli President Reuven Rivlin.

“If we do not act fast, the dynamics on the ground will only get worse.”

He added that “it is not too late to avoid a broader crisis” and urged renewed peace efforts, with negotiations at a standstill for more than a year.

“Beyond the immediate tensions, what is missing is the resolve to restore a political horizon for talks, and a political process that delivers real results and peace,” he said.

“We must, for the future of our children, come back from this dangerous abyss, safeguard the two-state solution, and lead people back to the road toward peace.”

In a sign of growing international worry, US Secretary of State John Kerry will also meet Netanyahu in Germany this week and Abbas later at an unspecified location in the Middle East.

German Foreign Minister Frank-Walter Steinmeier, during a visit to Jordan, also urged Israel and the Palestinians to avoid further inflaming the unrest, warning of “incalculable consequences”.

The stabbing occurred around Beit Awwa in the southern West Bank.

Clashes had also erupted in Hebron earlier in the day as Israeli troops destroyed the home of a Palestinian jailed for a deadly knife attack last year.

The demolition occurred as Israel took further steps in its bid to deter violence and tamp down what it sees as incitement, also arresting a senior Hamas official.

Last week, the Israeli government ordered an intensification of punitive home demolitions in response to the wave of unrest.

It says the controversial policy acts as a deterrent but critics say the main victims of such demolitions are relatives forced to pay for another person’s actions.

Another attack Tuesday saw an Israeli soldier and a civilian injured after a Palestinian attempted to ram his car into a group of pedestrians in the West Bank, then exited with a knife and was shot dead, officials said.

The incident occurred at an intersection on a highway south of Jerusalem near the Jewish settlement of Gush Etzion in the occupied West Bank.

More than 40 Palestinians have been killed in the upsurge in violence that began at the start of the month, including alleged attackers. Eight Israelis have died in attacks.

Israeli security forces have found themselves seeking to clamp down on unrest while not provoking a further escalation of violence.

But checkpoints in Palestinian areas of annexed east Jerusalem, where many of the attackers have come from, and measures such as home demolitions have provoked further anger.

Videos of Israeli security forces shooting dead alleged attackers that have spread online have also fed unrest, with Palestinians seeing some of the shootings as unjustified.

At the same time, the gun, knife and car attacks have sparked fear among Israelis, and some politicians have urged residents to arm themselves in the face of the violence.

Human rights activists blamed such comments in part for an incident on Sunday night, when an Eritrean man was mistaken for an attacker and killed in the southern Israeli city of Beersheba.

The mob violence came after an Arab Israeli gunman also armed with a knife stormed a bus station, shooting dead a 19-year-old soldier and wounding around 10 others.

The gunman was killed, while a security guard at the bus station shot the 29-year-old Eritrean thinking he was a second attacker. A mob also beat him, and the man died later.

Netanyahu warned Israelis against vigilantism after the incident, saying no one should “take the law into their own hands”.