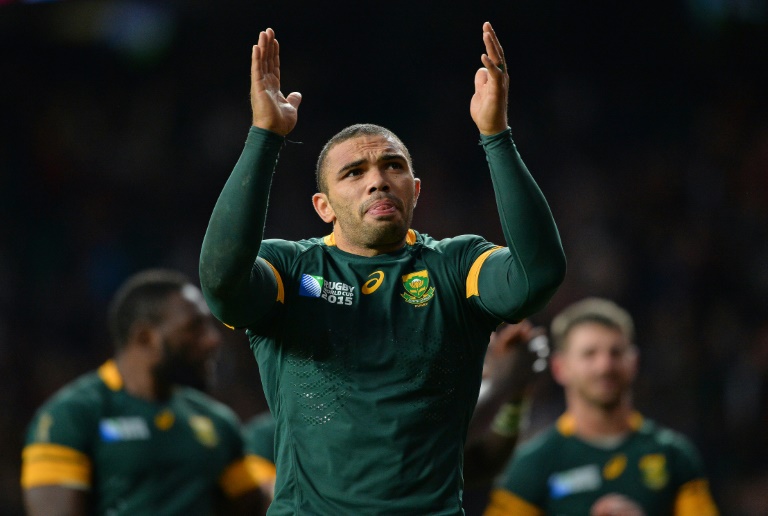 Springbok great Bryan Habana paid tribute Tuesday to a South African schoolteacher and rugby coach who was brutally killed in a gang attack.

Zukisa Kela, 25, his fiancÃ©e and another couple were set upon by a 12 man gang in a Johannesburg park in an attack strongly condemned by the South African government.

Kela and a friend were tied up and thrown into the Rhodes Park’ lake. Both of them drowned.

One of the women was raped, while the other escaped and ran down the streets of the eastern suburb of Kensington calling for help.

The News24 website reported that Kela’s last words to the school principal ahead of South Africa’s World Cup quarter-final win over Wales at Twickenham on Saturday were: “Viva maBokoboko viva” (Long live the Springboks).

“On behalf of the Springboks and South African rugby to Zukisa Kela and his family for the tragedy that happened over in South Africa, our thoughts and prayers are with you,” said Habana at the squad’s hotel in Guildford, southwest of London.

“Hopefully by doing what we do on Saturday we can bring a country together, unite a country and make sure that whatever happens back home, people have some form of hope.”

Habana said it was easy to get caught up in all the hype that comes with being a Springbok.

“For a lot of us, especially coming from South Africa, where rugby is such a passionate sport and that has done so much for our country, being able to have the privilege and honour of wearing that jersey sometimes overclouds the perspective of life,” he explained.

“Losing a quarter-final, losing a semi-final, even losing a final of a World Cup would never be ideal, and losing is certainly not something we have on the back of our minds – but the loss of life is not something you can put a value on.

“And we all understand the responsibility we have as Springboks, when we get the opportunity to wear this jersey for a country that is unique and where things get done a lot differently.

“Rugby has been really fortunate to have given our country back so much, to have united in a way like no other, and inspired and given hope like never before.

“That iconic moment of the late Nelson Mandela giving Francois Pienaar that trophy back in 1995, that was a watershed moment not only for myself and a lot of players, but for our country.

“Going out there on Saturday we’d like just to inspire, to give back and to hopefully unite a nation that so dearly needs it at the moment.”

South Africa’s government condemned the murders and the rape on Monday.

“This dreadful incident and similar criminal activities should be condemned by all peace loving South Africans,” spokesperson Phumla Williams said in a statement.

She added everything possible was being done to catch the 12 men responsible.

Ben Robinson, principal of Westbury Secondary, told News24 that Kela had revived rugby in the school.

“He was a very vibrant, energetic man. He was our rugby co-ordinator… A sport which was dormant at this school. He revived it.”

Robinson added: “I am trying to understand what went through the minds of the people who committed this heinous crime. It is beyond human comprehension.”