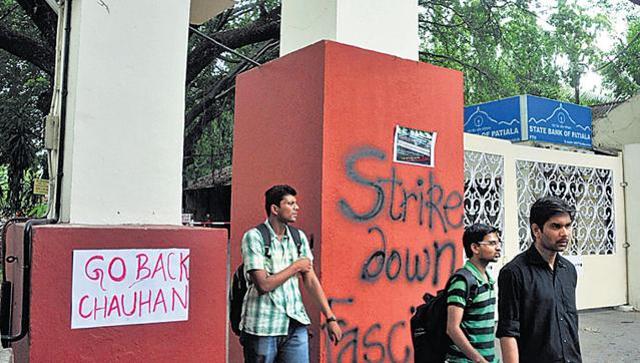 New Delhi: Yet another round of talks on Tuesday failed to end the standoff between the government and FTII students over the appointment of Gajendra Chauhan as its Chairman, with the students alleging “unwillingness or inability” of the authorities to act upon their core concerns.

The students, who have been agitating for removal of Chauhan as well as four society members of the Pune-based institute, held 5th round of talks with Union Minister of State for Information and Broadcasting Rajyavardhan Singh Rathore for about three hours here to resolve the matter.

After the meeting, both sides said they discussed various issues but clearly there was no indication of an end to the 131-day-old strike at the Pune-based Films and Television Institute of India (FTII).

The students, who describe the appointments to FTII society as “thoroughly unjust and lacking credibility”, said the best way to move forward should now less be attributed to an effort on their part and “more to an unwillingness of the authorities to understand the academic and artistic concerns of the students or an inability to act upon them.”

In a statement, the agitating students said they will now decide their future course of action on the basis of “collective wisdom and also an acknowledgment of the sacrifices” they have already made.

“Even if we have to hire more studios or if we have to provide them Doordarshan studios in Mumbai, the main thing is that students should pass this course, get diplomas and do something in their life. This is the most important thing for students,” the minister said.

With regard to demands for removal of Chauhan and some society members, the minister said the FTII society was constituted after consulting all the members and the composition was acceptable to everyone. “However, later some people gave different opinions,” he added.

When a reporter asked whether there was any discussion about the “contentious” appointment of Chauhan as the FTII council chief, Rathore claimed that the issue was “not contentious”.

Student leader Vikas Urs said they have asked the ministry to have a relook at the appointments of not just Gajendra Chauhan but also four other society members. “All the five appointments are contentious,” he said.