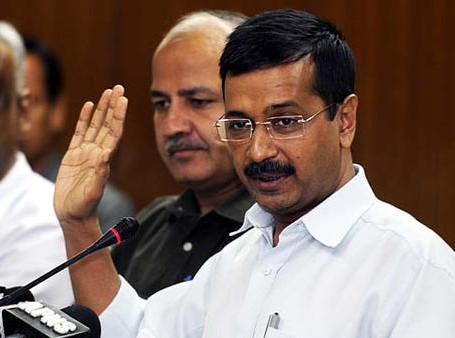 Clinching onto a new survey’s findings on corruption in Delhi Police, Chief Minister Arvind Kejriwal today has upped the ante against the Centre saying the Central government should hand over police and Anti-Corruption Branch to AAP government.

In a series of tweets, Kejriwal claimed the survey findings raised questions on Central government’s “intentions” while they had shown that corruption has come down in Delhi government, which “proved” AAP government’s intentions and administration capability.

According to media reports, the study conducted by Centre for Media Studies (CMS) – India Corruption Study 2015, shows 45 percent of residents surveyed found reduction in corruption across departments of Delhi Government vis-a-vis those of Central Government.

Close to a third of Delhi residents reportedly paid bribe at least once in last one year.

The survey finding reportedly says that Delhi Police which comes under Centre, is the “most corrupt” public service department in the national capital.

Kejriwal has been demanding that the Centre hand over control of Delhi Police to his government.