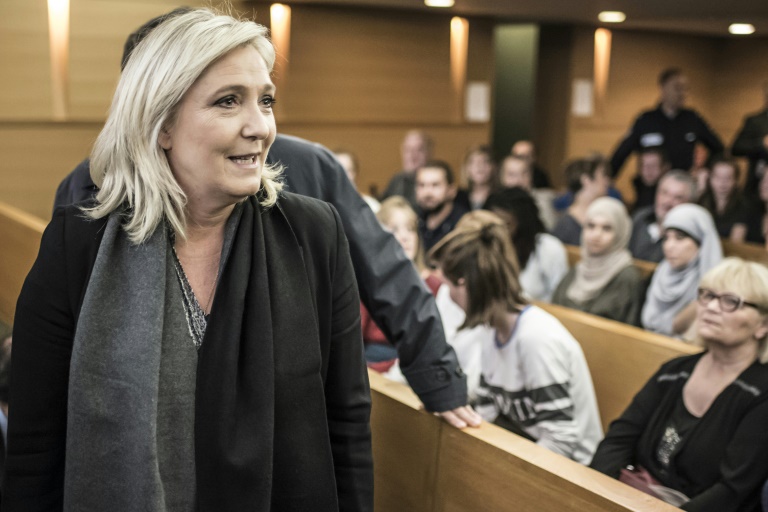 The 47-year-old, who has won a string of election successes after working to soften the party’s image, appeared in court over the comments she made while campaigning to take over the FN leadership from her father five years ago.

“I have committed no crime,” said a smiling Le Pen as she entered the court in the southeastern city of Lyon.

But prosecutors asked that Le Pen be acquitted.

“Mrs Le Pen, by denouncing these prayers in the public space, which did not refer to the entire Muslim community but to a minority, only exercised her freedom of expression,” prosecutor Bernard Reynaud said.

While on the campaign trail in December 2010, Le Pen complained about places in France where Muslims worshipped in the streets outside mosques when they were full.

“I’m sorry, but for those who like talking a lot about World War II, if it comes to talking about the occupation, we can talk about it, because that (Muslims praying on the street) is the occupation of territory,” she told a crowd in Lyon.

After the comments, which provoked outrage in France, Le Pen was investigated but the probe was later closed without further action.

However, a complaint by an association led to the launch of a judicial enquiry in January 2012.

Le Pen was charged in July 2014 after her immunity as a member of the European Parliament was lifted following a vote requested by French authorities.

She is accused of “inciting discrimination, violence or hatred toward a group of people based on their religious beliefs.”

This is the first time she has been charged with inciting hatred, compared with her father who was repeatedly convicted for racist and anti-semitic rhetoric.

The French Muslim Council’s secretary general Abdallah Zekri said that it was “such comments often made by politicians that feed the climate of Islamophobia we currently live in.”

But Le Pen defended her actions as she entered court earlier in the day.

“Street prayers are an illegal activity,” she said. “It is a way of occupying… a territory and imposing religious law.”

“I am in my right as a political leader to raise the crucial issue,” she added. “It’s even a duty.”

But the country has only 2,500 mosques and a number of projects are pending because of the lack of financial support.

Since taking over the FN, Le Pen has tried to soften its image and has scored a series of election successes.

However the party remains staunchly anti-EU and anti-immigration and Le Pen has seized upon Europe’s migrant crisis to win votes ahead of regional elections in December.

The FN is already leading opinion polls in several regions.

Le Pen has campaigned on the party’s traditional line of calling for an end to Europe’s borderless Schengen zone and actions seen as enticing migrants to France.

This time, however, her rhetoric has been more forceful, with Le Pen comparing the flood of migrants on Europe’s doorstep to the “barbarian invasions” of the fourth century.

In September, she said of migrants: “We should warm them up, feed them and then send them back where they came from.”

Despite its growing popularity, the party’s image suffered after a bitter public spat between Marine and her father, Jean-Marie Le Pen, which led to her ousting him from the party he founded over a series of controversial comments.

Marine Le Pen decided enough was enough after her father repeated his view that the Nazi gas chambers were merely a “detail” of history and also claimed France should establish close relations with Russia to save the “white world”.

The FN has also been slapped with charges of fraud as part of an ongoing probe into campaign financing.