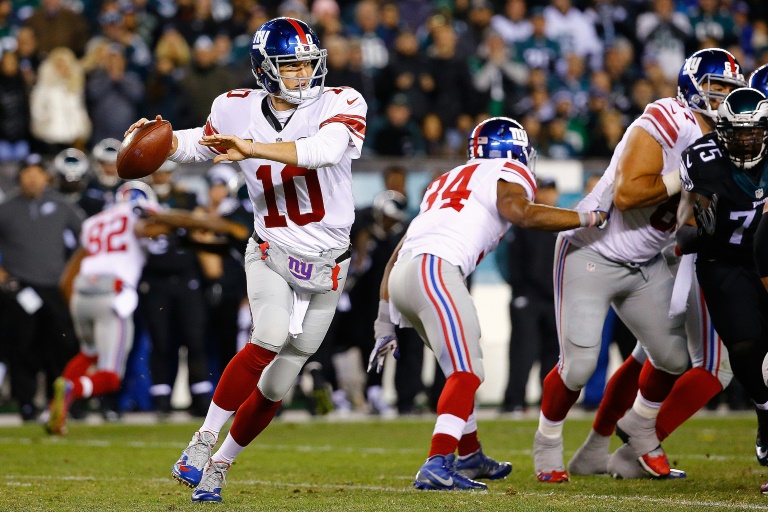 The Philadelphia Eagles intercepted New York quarterback Eli Manning twice in a 27-7 win over the Giants to take charge of the NFC East division.

At 3-3, the Eagles are tied with the Giants atop the division with the advantage in the head-to-head-tiebreaker.

In a game littered by mistakes by both teams, Eagles cornerback Nolan Carroll came up with the decisive play, picking off a Manning pass and returning it 17 yards for a touchdown that gave the hosts a 14-7 lead in the second quarter.

Manning had completed his first 10 passes in a textbook start that included an eight-play, 80-yard touchdown drive on the opening possession of the game.

But it proved to be the Giants’ only score of the game as Manning was sacked four times and penalized twice for intentionally grounding the ball.

Running back DeMarco Murray had his first 100-yard rushing game with the Eagles, finishing with 109 yards on 22 carries.

The Eagles led 17-7 in the third quarter when they marched downfield on an 85-yard, 11-play drive that was helped by a roughing-the-punter call against Giants defensive tackle Nikita Whitlock.

The Eagles took advantage of that penalty, eventually scoring on a 12-yard run by Murray that put them up 24-7 with 6:13 to play in the third quarter.

Philadelphia’s defense kept the Giants at bay in the fourth, and Caleb Sturgis kicked a 39-yard field goal to make it 27-7 with 8:19 left in the game.