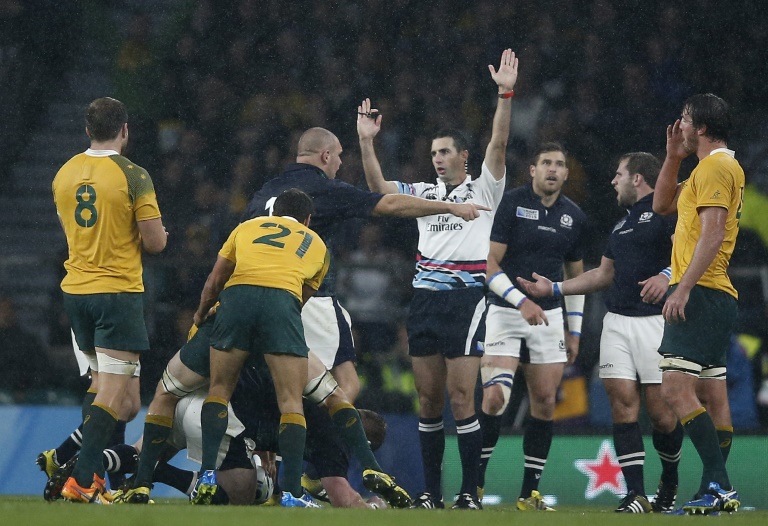 Australian coach Michael Cheika on Tuesday led a backlash against condemnation of referee Craig Joubert who was ruled to have made a wrong decision that got Australia into the World Cup semi-finals.

An angry Cheika warned that World Rugby’s move to publicly slate Joubert was wrong in the Australia-Scotland quarter-final risked opening up a floodgate of complaints.

Other leading rugby figures also leaped to the defence of the South African referee who ran from the field at the end of Sunday’s game amid jeers from Scottish fans at Twickenham. Some media reports said a bottle was hurled at him.

Bernard Foley took the last-minute penalty mistakenly awarded to Australia to get three points and a 35-34 Wallabies win.

Australia now play Argentina in the semi-finals on Sunday following their close shave with an upset by the unfavored Scots.

Some former Scottish and other internationals labelled him “a disgrace.”

World Rugby made the rare move on Monday of releasing its review of the game which said the 37-year-old Joubert had been wrong.

Joubert, who will not take part in any of the World Cup semi-finals this weekend, gave Australia a penalty for a knock-on offside.

After reviewing television images, a World Rugby review committee said it was “clear” that after the knock-on, Australia’s Nick Phipps touched the ball and that a player can be put onside by an opponent who intentionally plays the ball.

“The appropriate decision, therefore, should have been a scrum to Australia for the original knock-on.”

The six member committee — headed by former Scotland flanker John Jeffrey — stressed though that as no foul play had been involved, Joubert could not have referred the incident to the third match official and a television replay.

World Rugby referees chief Joel Jutge said: “Despite this experience, Craig has been and remains a world-class referee and an important member of our team.”

With no team from Europe reaching the World Cup semi-finals for the first time, there was a storm of criticism, mainly in Britain, after the game.

Former Scotland great Gavin Hastings said: “If I see referee Craig Joubert again, I am going to tell him how disgusted I am. It was disgraceful that he ran straight off the pitch at the end like that.”

Former England scrum-half Matt Dawson, a World Cup-winner in 2003, said on Twitter: “Craig Joubert you are a disgrace and should never referee again!!”

“I’d like my mates to back me up a bit more,” Cheika told an Australian team press conference on Tuesday.

“We have the right principles in the game, but now will other teams be drawing up a list of things to review: the Samoans about a Scottish knock-on before their winning try?” he added.

“Each team will have a list as long as your arm. Genuinely I’ve never seen that before. I am not sure why that decision had to be publicly reviewed and put out there.

I really hope his fellow referees stand behind him.”

“Some of these comments have been very excessive,” said World Rugby’s Gosper.

“Mistakes are made on a rugby field and not just by officials. People should understand that.”

“I have been a little saddened by some of the comments made towards the referee as that doesn’t have a place in our game,” said former England captain Lawrence Dallaglio.

Joubert is considered one of rugby’s top referees. He faced criticism from France, however, after the 2011 World Cup final when he did not give a penalty to France who lost to New Zealand 8-7.

Joubert was a banker who devoted his life to rugby refereeing after the death of his father, also a top referee, said former South African captain Bobby Skinstad.

“His dad made such an impact on so many schoolkids’ lives and he was bit of a legend in the Kwazule-Natal area,” said Skinstad.

“He actually passed away from cancer and Craig had dedicated his refereeing career to the memory of his father.

“Craig is a quality individual and all the stuff around the decision has been blown out of all proportion. I’d feel really sad if any of this has got to him as a person given he has given so much to the game,” he said.