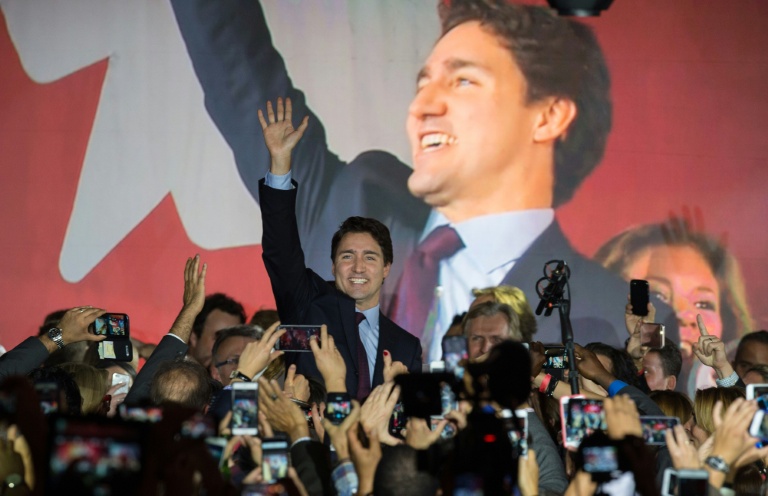 Canada’s Liberals have won a landslide general election victory, with young leader Justin Trudeau ending a decade of Conservative rule with pledges to raise taxes on the rich in a struggling economy.

For many Canadians the vote was a referendum on outgoing premier Stephen Harper’s management style, criticized as autocratic, and on who was better placed to put a sputtering economy back on track.

Besides raising taxes on the richest Canadians, Trudeau, the youthful and good-looking son of the late and beloved ex-premier Pierre Trudeau, has said he will lower them for the middle class.

Canada’s economy contracted in the first half of this year. The country is the world’s fifth largest oil producer and has suffered dearly from a big drop in prices for crude.

Trudeau has also pledged to take in thousands of refugees from Syria and battle climate change.

The 43-year-old — who ran a combative campaign and offered up what he called a “new vision” for the nation — would be able to form a majority government with 184 of the 338 seats in the House of Commons, according to still incomplete figures from Elections Canada.

Turnout was 68 percent, compared to 61 percent in the last election four years ago.

Public opinion had swung wildly during the hard-fought campaign, which at 11 weeks was one of the longest in Canada’s history.

The Liberals came from behind late in the campaign, with Trudeau promising “not just a change in government, but a better government.”

“Tonight Canada is becoming the country it was before,” Trudeau said in his victory address.

“Canadians from across this great country sent a clear message tonight — it’s time for a change in this country, a real change,” he said.

Trudeau was elected Liberal leader only two years ago, after two past leaders failed to unseat Harper in 2008 and 2011 and subsequently resigned.

He appears to have made good on his hope to recreate the “Trudeaumania” that swept his charismatic father to into office in 1968.

Harper, who took power in 2006, had been seeking a fourth term in office.

But Trudeau tapped into a strong desire for change in administration, and took advantage of an all-time low in Harper’s popularity.

Indeed, “there was a kind of mini Trudeaumania” surrounding the campaign, said Claude Denis, a politics professor at the University of Ottawa.

Besides campaigning on a pledge to raise taxes on the richest and lower rates for middle-income Canadians, Trudeau said he would spend billions on infrastructure to give the struggling economy a boost.

He also pledged to legalize marijuana.

Along the way was debate on how Canada should handle a record influx of people fleeing the war in Syria, a court ruling quashing a ban on the niqab veil worn by some Muslim women, and economic recession.

The left-leaning New Democratic Party, led by Thomas Mulcair, had hoped to build on its second-place finish in the last ballot in 2011, and govern for the first time.

But the party stumbled in recent weeks. It lost key support in Quebec province over its opposition to the popular ban on the niqab. It looked to finish in third place.

“This election has been about change and tonight Canadians have turned the page on 10 long years (of Harper rule),” Mulcair said in his concession speech.

At times, the battle descended into personal attacks, with Tory ads suggesting that Trudeau was “just not ready” to be prime minister.

But arguably, the long contest gave him time to sharpen his campaign skills, and give Canadians a chance to get to know him better. His colorful past includes work as a snowboard instructor, a bartender and a bouncer.

By the end of the campaign, Trudeau had even lost his voice.

On voting day, a cold snap hit parts of the country and attention on the Toronto Blue Jays’ first baseball playoff run in 22 years risked resulting in a low voter turnout. But Canadians turned out in force after record low turnout in the past two elections.

Harper said in a concession speech, as his party announced his plans to step down as Tory leader, that “the outcome is not the one we hoped for.”

But, he added, “We gave everything we had to give and we have no regrets.”