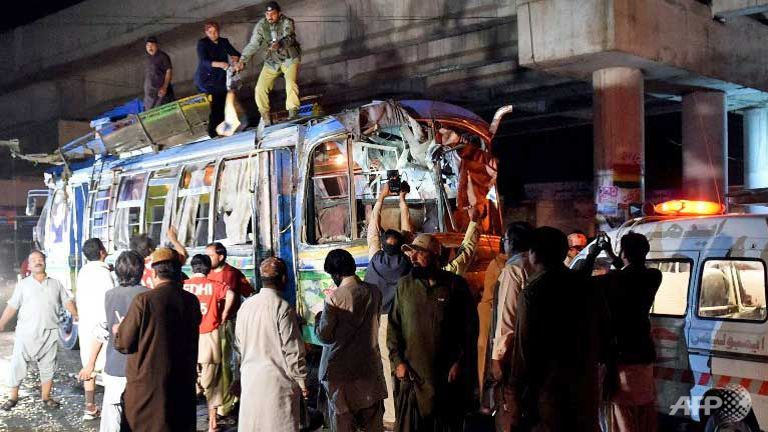 At least 11 people were killed and many more injured on Monday when a powerful bomb ripped through a passenger bus in Pakistan’s southwestern Baluchistan province.

A bomb disposal official said a large explosive device was planted at the rear of the bus, which was carrying labourers working in central Quetta to their homes on the outskirts of the city.

“The death toll from the bus explosion is 11, while 22 people are injured,” Akbar Hussain Durrani, home secretary of Baluchistan province, told AFP.

A senior police official and a doctor at the city’s main hospital confirmed the causalities.

Chaotic scenes unfolded in the emergency department of Provincial Sandeman Hospital as the dead and wounded were brought in, their blood staining stretchers and beds, while panicked relatives clamoured for help.

“My brother is a labourer, he was in the bus where the bomb exploded,” Ali Bukhsh told AFP.

“We were waiting for him at dinner but he did not arrive… then we learnt about the blast and ran to the hospital,” he said, adding that his brother has regained consciousness but is still in severe pain.

Doctor Noor Baluch, a police surgeon, said 10 people were already dead by the time their bodies arrived in hospital, while 23 others had been wounded.

“Later an injured person died in hospital. Four of the wounded people are still in critical condition,” he said.
Commander Abdul Razzaq from the bomb disposal squad said the bomb was in the rear of the vehicle.

“The explosive device weighed up to 6 kilogrammes (13 pounds) and was planted in the back of the bus. Most likely it was a time device,” he told AFP.

Senior police official Waheed Khatak told AFP the blast took place as the bus was driving near a fly-over in the Sariab road neighbourhood outside Quetta.

Pakistan’s southwestern Baluchistan province, of which Quetta is capital, is rife with Islamic, sectarian and separatist insurgencies.

The mineral-rich province has long been targeted by militants, and has been the scene of several attacks against the Hazara community in previous years.

In early 2013, more than 180 people were killed in two suicide bombings in Quetta in one of the bloodiest attacks on the Shiite minority.

Baluch separatists demanding more autonomy and control over gas and mineral resources have also frequently targeted security forces, although there has been a lull this year after a police clampdown.

Rebels began their fifth insurgency in 2004, and hundreds of soldiers and militants have been killed since then.
Pakistan officials have blamed India for stirring up the separatists.