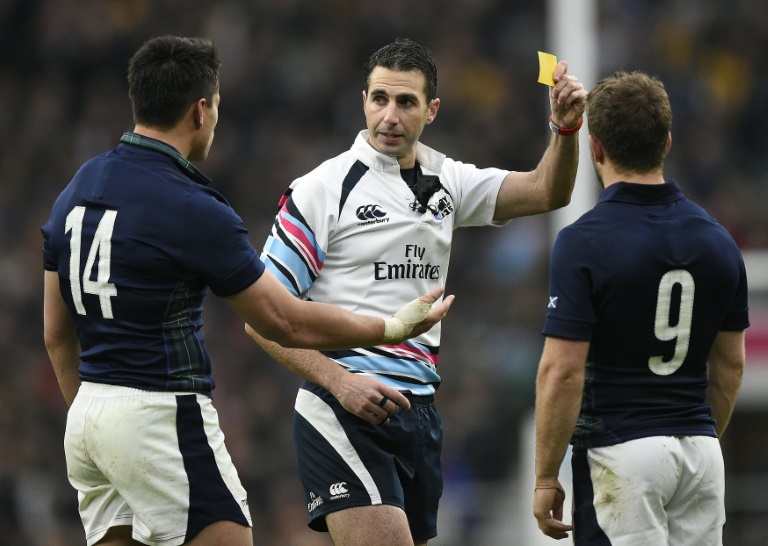 Australian coach Michael Cheika also defended the South African referee over the penalty that has made Joubert the target of Scottish ire.

Joubert ordered a last minute penalty that Brett Foley converted to give Australia a 35-34 win in Sunday’s quarter-final. Video replays indicate it probably was not a penalty however.

Joubert ran off at the end without shaking hands with the two sides. Some media reports said a bottle was thrown at him as he departed.

“Maybe he was keen to get to the bathroom, who knows?” Gosper told BBC radio.

“I’m sure as a referee he sensed a bit of hostility,” Gosper added.

“When you have a hostile 82,000 people, for whatever reason, who knows how that affects behaviour.”

“Craig Joubert is a superb referee and has been for a long time and he’s a good man. There will be reasons for whatever Craig did.

“We do a full review of the referees post-game, and that process is under way at the moment.”

Joubert ruled that Scotland’s Jon Welsh was deliberately offside and awarded a penalty. Television replays indicated that Australia’s Nick Phipps touched the ball back to Welsh and that Joubert should have awarded a scrum instead.

Joubert’s ruling came under attack from several former internationals. Scotland great Gavin Hastings said: “If I see referee Craig Joubert again, I am going to tell him how disgusted I am. It was disgraceful that he ran straight off the pitch at the end like that.”

Former England scrum-half Matt Dawson, a World Cup-winner in 2003, said on Twitter: “Craig Joubert you are a disgrace and should never referee again!!”

Australian coach Cheika said “I donâ€™t like the way that people are making something out of the way he ran off the field.

“Youâ€™ve got to assess the things for what they are and not the more romantic nature of what we’re all thinking. Heâ€™s just a person like everyone else.”

Cheika added that he had heard the reports that a bottle had been thrown.

“I don’t think it is funny. Iâ€™d be racing off too if I saw a bottle coming. I donâ€™t think anything of him going off quickly.”

Cheika, who has disputed Joubert’s decisions in the past, said he could not comment on why Joubert had not even stopped to shake the players hands.

“Maybe he was worried about something, maybe he got a word in his ear from the security guards of the tournament organisers to say we think you should leave the field, who knows?

Scotland captain Greig Laidlaw said after the game he had asked Joubert why he had not called for television replay assistance.

World Rugby said the television match official could only be called upon to rule on the build-up to scoring a try or an act of foul play.