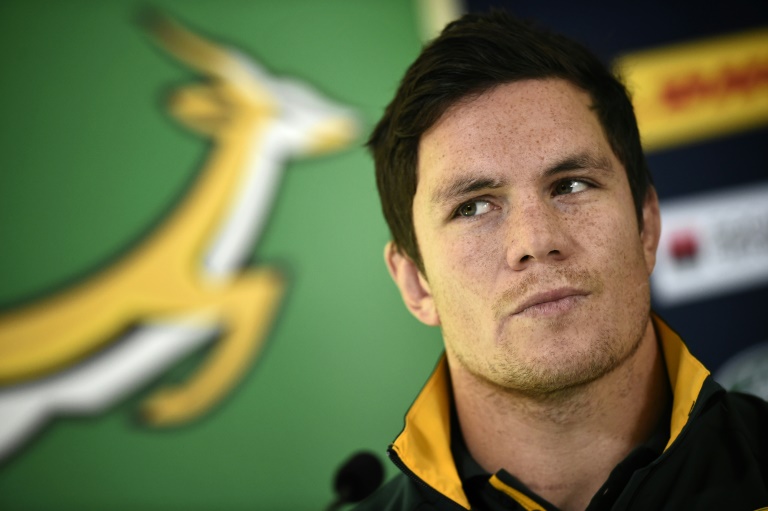 South Africa started plotting their World Cup campaign against the ominously in-form New Zealand with injury worries but insisting they can still beat the best.

Flanker Francois Louw said Sunday he had seen only “snippets” of New Zealand’s crushing 62-13 quarter final win over France as he had been busy celebrating his own country’s thrilling 23-19 victory over Wales.

The Springboks have worries over hooker Bismarck du Plessis, who has a lacerated hand, and lock Lood de Jager, who suffered a foot tendon injury against Wales.

It was Louw who accidentally stood on du Plessis’s hand. Team doctor Craig Roberts said it was a “nasty laceration” but fortunately not fractured.

Roberts said du Plessis, de Jager and veteran Victor Matfield, who has a hamstring strain, will be assessed and a decision taken during the week.

Louw admitted he was surprised at the surrender of the French, but insisted the Springboks do not feel overawed ahead of Saturday’s semi-final at Twickenham.

“We managed to watch snippets of it, and obviously it was a great performance from their side (the All Blacks) and a great victory over the French. They are always going to be a strong outfit going into this tournament,” Louw said.

â€œFor us it is not really a concern in the sense that to be the best you have to beat the best, and we take it week by week and focus on the team that we have to face in the week.

“That happens to be the All Blacks now in the semi-final. Our focus will be on them.

“Our paths have crossed a lot in the past and it is always a big game, a bit of a derby really. We will plan accordingly in our preparation and work hard this week.”

South Africa were considered a national disgrace after Japan beat them 34-32 in their opening game. But the Springboks’ confidence has gained in strength with every game since.

Louw however said he was surprised at how easily France were beaten.

“France are a very good outfit and when they do play well, when they do click they can beat any team on the day.

“I didnâ€™t manage to catch the full game so I didnâ€™t see which areas they were weak in, but I thought they would put up a stronger fight against the All Blacks.”

Louw said there was an â€œexcitementâ€ facing the New Zealand, especially at the Rugby World Cup.

“It is always nice to play against the All Blacks, it is always a great occasion and especially now here in 2015 at the World Cup,” Louw added.

“I can imagine they are just as excited about it as we are. There are a lot of nerves, a lot is resting on this game and there is also that personal rivalry that adds a bit extra to the game.”

Reflecting on the win against Wales, Louw said the small margins made a difference in the match, which the Boks snatched with a Fourie du Preez try five minutes before the end.

â€œWe always knew it would be a tough challenge going up against Wales, they are not a bad team at all.

“They beat us last time around and before that all the games have been really tight, all the way to the bitter end.

“I didnâ€™t think it would be so much to the bitter end yesterday but composure was key for us in the game,” he said.

“In playoffs and knockout rugby it is those small margins that make a difference. One more penalty can make a difference in winning and losing but the guys were composed, and kept the discipline up.”