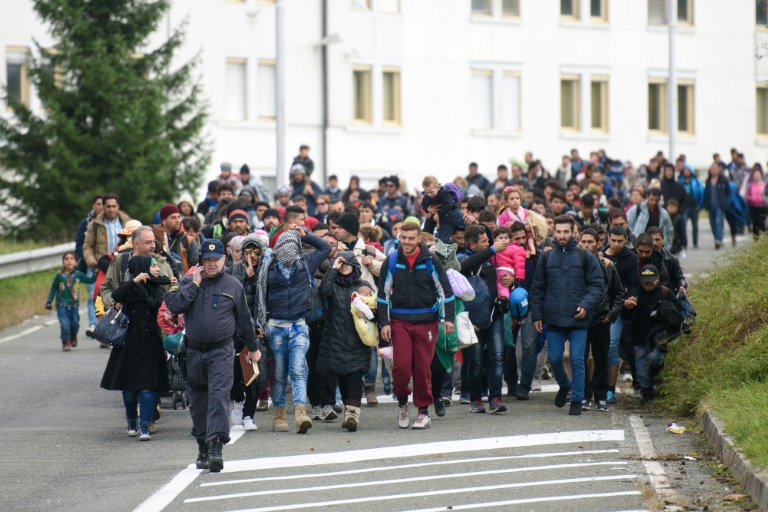 Slovenian authorities said Monday they had refused to let in more than 1,000 migrants arriving from Croatia after a daily quota had been reached, stoking fears of a new human bottleneck on the western Balkan route.

Tens of thousands of refugees and migrants, mostly fleeing violence in Syria, Iraq and Afghanistan, were forced to forge new routes to northern Europe after Hungary sealed its Croatian border with a razor-wire fence.

The Hungarian government’s latest move to stop the flow of migrants travelling through Greece, Macedonia and Serbia pushed them toward Slovenia, from where they hope to continue towards Austria and eventually Germany.

A train carrying around 1,800 people arrived overnight at the Sredisce ob Dravi checkpoint on the Croatian side, but only 500 of “the most vulnerable” were allowed to cross into Slovenia and taken to a nearby registration centre, police spokesman Bojan Kitel said.

“We try to carry out a coordinated and manageable inflow to avoid exceeding the accommodation capacity we have in Slovenia. For that reason, we do not let in migrants from Croatia without first having the capacity. We give priority to the most vulnerable categories,” he told AFP.

Among those allowed in were children and women, including one heavily pregnant woman who was taken to hospital.

Long lines have also formed on Croatia’s border with Serbia. Several hundred people remained stuck there on Monday morning, after having spent the night in rain and freezing temperatures, an AFP photographer said.

Slovenia stressed Sunday it would remain firm in its decision to allow in up to 2,500 people a day to help ease pressure on its own and on Austria’s borders, though Croatia has called for 5,000 to be let through.