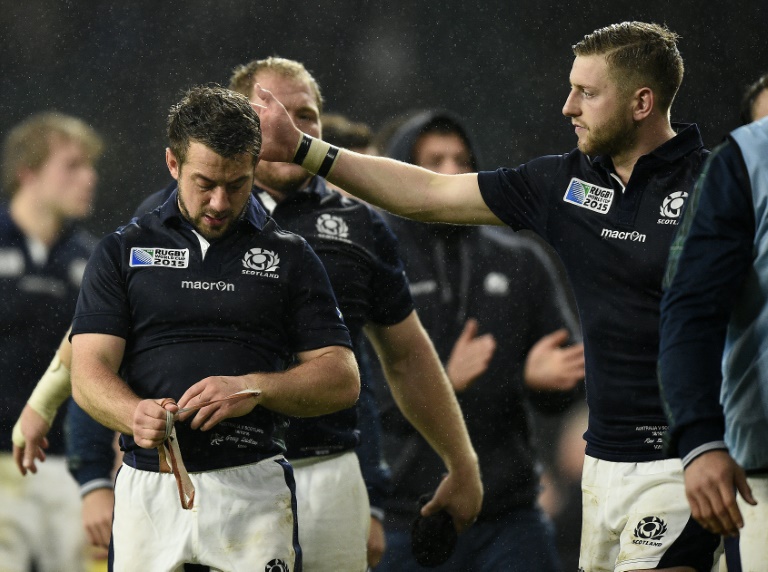 Scotland captain Greig Laidlaw believes the side are on track to become a strong team despite the bitterness of a heart-breaking World Cup quarter-final defeat.

The Scots were seconds away from a semi-final place when a controversial penalty awarded by South African referee Craig Joubert gave Bernard Foley the chance to kick Australia to a 35-34 win at Twickenham on Sunday.

It was desperately bad luck for Scotland, who despite being outscored five tries to three by the Wallabies, harried the southern hemisphere champions into a series of errors.

When Mark Bennett scored an intercept try with six minutes left it seemed Scotland, for whom scrum-half Laidlaw kicked 19 points, were on the brink of a famous victory.

Foley struck the decisive blow for two-time world champions Australia right at the death. And for the first time in World Cup history, no Northern Hemisphere side has reached the semi-finals.

Yet the fact the Scots came so close belied their position as bottom nation in this year’s Six Nations after losing all five matches in the European tournament.

“We were one kick away from being in the semi-finals and arguably we should have been there. Now’s not the time to move forward, we need to get over this disappointment first.”

However, he added, “We’ve got the makings of a strong team. The spirit of our side is unbreakable at times and that’s the spirit we’ve had throughout the tournament.

“We’re a tight-knit group and there are no egos. Every man works as hard as the next.”

Scotland coach Vern Cotter added: “I feel for these guys. It was a tough day and you can question those fine margins. They stayed in the game and I’m proud of them as men and as rugby players. It’s a tough one to take.”

Australia coach Michael Cheika attributed much of Scotland’s performance to the influence of Cotter.

“I am a big believer that having good people involved, it’s inevitable that teams improve,” said Cheika, who like former Clermont boss Cotter had a spell coaching in France’s Top 14, with Paris-based Stade Francais.

“I know Vern Cotter and (assistant Scotland coach) Nathan Hines very well. The rugby skills that surround these people are really going to lead to that team becoming a better side.”

As well as the last-ditch penalty call, the Scots also felt hard done by when Joubert, who refereed the 2011 World Cup final, sent wing Sean Maitland to the sin-in in the second half for a deliberate knock-on.

Australia scored 10 points in the absence of Maitland, who had he caught the ball could have been on his way to an intercept try.

“If Sean had caught that ball he would probably have scored,” said Cotter. “He was thinking ahead. It was a 50-50 (decision).”

But Scotland back-row Josh Strauss insisted the team could take heart from pushing Australia to the brink of defeat.

“It’s been coming on leaps and bounds. We’re very disappointed with tonight but I think going in to the Six Nations, as a group, a country and a union we can take a lot from this competition and build on it.

“It’s just a case of us doing the right things come next season and come the next game to put all the pieces in place,” he added.

Asked if Scotland could win the Six Nations, a bullish Strauss said: “Definitely. I think we showed in this competition, expecially tonight, what we are capable of as a team.

“We didn’t come into this game with any doubt that we were going to win. Unfortunately it didn’t happen.”