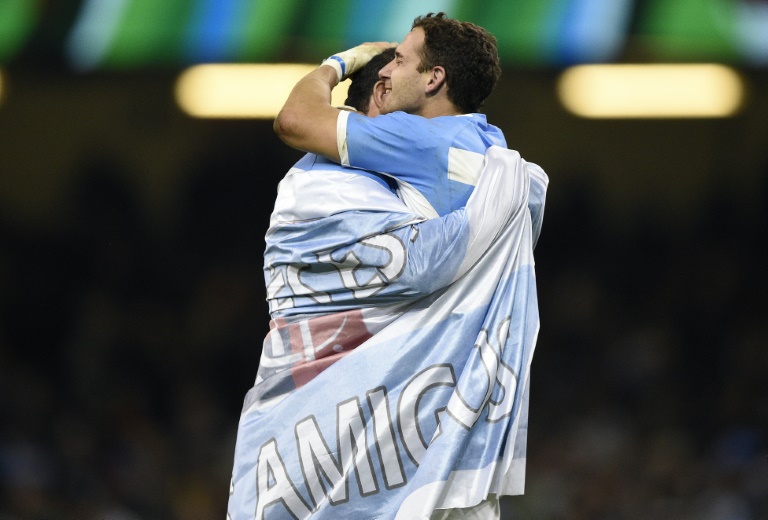 Argentina jumped to fourth in the world rankings issued Monday, confirming their emergence as a rising rugby power when they ensured an all-Southern Hemisphere final four in the World Cup.

The Pumas still face a tough battle at this tournament, but coach Daniel Hourcade seriously sees winning the 2019 World Cup as a achievable under their growth path.

The rapid rise follows their inclusion in the Rugby Championship in 2012 with fellow-semi-finalists New Zealand, Australia and South Africa.

They decided to use All Blacks’ 2011 World Cup winning coach Graham Henry as a consultant and their game has flourished ever since.

Henry convinced Argentina to abandon their one-dimensional forward power game and unleash the natural free-running flair which has been the hallmark of Argentina’s famous football sides.

“The first thing he (Henry) said was, the Argentine players have the ball in hand a lot but they don’t know how to go forward. They need to run with the ball more,” assistant coach German Fernandez said Monday.

“He taught us that we need to train to score tries.”

The impact is evident four years on. Argentina go into the semi-finals, where they play Australia, as a well-oiled point-scoring machine with 26 tries — Juan Imhoff has five — second only to New Zealand’s 34.

Fly-half Nicolas Sanchez is the second highest individual point scorer with 74 and Argentina are second to New Zealand on overall points scored with 222 to the All Blacks 236.

Their progress does not come as a surprise to Wallabies coach Michael Cheika, who fortunately has some inside knowledge in the shape of his scrum coach iconic former Pumas hooker Mario Ledesma.

“They play with a lot of width but that is set up by a great platform from their scrum,” said Cheika on Monday.

“They’ve been developing their play, they are more expansive with good playmakers and they are able to do all that because they have a good base, the scrum.

“They have been progressing over the past couple of years in a methodical fashion.”

The Pumas leap-frogged Wales and Ireland in the rankings released Monday, a day after their 43-20 win over the Irish in their quarter-final at Cardiff’s Millennium Stadium.

New Zealand remain on top ahead of Australia, who Argentina play in the seni-finals next Sunday at Twickenham.

South Africa climbed two places up to third after their narrow 23-19 win against Wales.

Hourcade, who replaced Santiago Phelan as coach in 2013, is a disciple of Henry’s, advocates the attacking game and Argentina’s reputation of being just a powerful pack with a kicking fly-half has become a fading memory.

The seeds for Argentina’s development were sown following their one previous semi-final appearance in 2007.

It was where Martin Landajo, Sanchez, Imhoff, Santiago Gonzalez Iglesias and Thomas Cubelli learned their trade.

Henry’s arrival saw then take the game to a higher level and the next advancement on Hourcade’s blueprint will come when they join the southern hemisphere’s Super rugby club competition next year.

It will be vital, he says, to continue the development of the side with many old heads including Agustin Creevy, Leonardo Senatore, Juan Martin Hernandez, Juan Manual Leguizamon and Juan Martin Fernandez Lobbe in their twilight years.

“We should have a powerful team within two years,” he said of the expected benefits from Super rugby.

“Of course we aim to go as far as much as possible in this World Cup, but the goal we have set is 2019.”