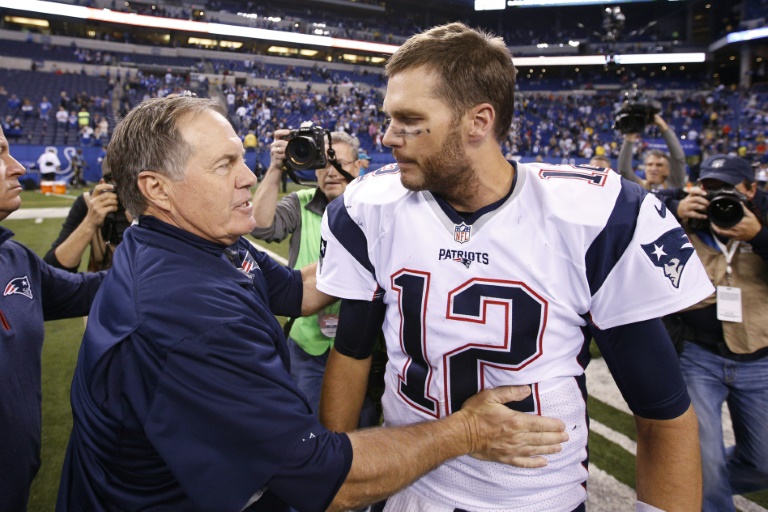 Tom Brady and the New England Patriots powered past the Indianapolis Colts 34-27 to improve their perfect 2015 record in a “Deflategate” grudge match.

Superstar quarterback Brady, stung by charges he played a role in New England’s use of under-inflated footballs in their AFC championship win over Indianapolis in January, insisted all week that the clash was not about revenge.

But he was dialed in on Sunday, throwing two of his three touchdown passes in the second half as the Patriots broke open a tight game with help from a failed trick play attempted by the Colts and their own unflappable calm.

Late in the third, the Colts tried to fool the Pats with an unusual formation on a fourth-and-three punt, but New England adjusted and made the stop, regaining the ball on the Colts’ 35-yard line — promptly marching to a quick touchdown for a 34-21 lead.

It was the second special teams mistake by the Colts to set up a Pats touchdown — after New England capitalized on a failed onside kick in the first half.

The errors overshadowed a solid performance from Colts quarterback Andrew Luck in his first start since hurting his shoulder in a win at Tennessee on September 27.

Brady completed 23 of 37 passes for 312 yards. His first interception of the season was returned for a touchdown, but the Pats improved to 5-0 — their 183 points scored this season breaking the club record for most through the first five games, 182 set in 2007.

He was downbeat, however, refusing to be drawn on whether there was special meaning in winning a game that would have been his first of the season if a court hadn’t overturned his four-game “Deflategate” ban.

Four more teams stretched their perfect records Sunday as the Cincinnati Bengals, Denver Broncos and Green Bay Packers all improved to 6-0 and the Carolina Panthers raised their record to 5-0.

The Panthers ended a three-year, four-defeat drought against Seattle, stunning the Seahawks with a 27-23 triumph sealed by quarterback Cam Newton’s touchdown pass to Greg Olsen in the final minute of the contest.

A miscommunication in the vaunted Seahawks defense saw Olsen run into the end zone untouched by defenders Earl Thomas and Richard Sherman.

It was the second week in a row that the Seahawks, who fell to 2-4, surrendred a touchdown in the final minute of regulation.

“It’s very frustrating,” Thomas said. “We knew we had them. We don’t suck.”

In Green Bay, Packers cornerback Damarious Randall batted down a pass from San Diego quarterback Philip Rivers at the goal line in the waning seconds as the Packers held off the Chargers 27-20.

It was defense that insured the Broncos remained unbeaten with a 26-23 overtime victory over the Browns in Cleveland.

Brandon McManus kicked a 35-yard field goal with 4:56 remaining in overtime after the Broncos defense sacked quarterback Josh McCown twice on the Browns’ only possession of the extra session.

The lead had changed hands twice in the fourth quarter before a 26-yard field goal by the Browns forced overtime.

Broncos quarterback Peyton Manning threw a 75-yard touchdown pass to wide receiver Emmanuel Sanders midway through the fourth — one play after the Browns took the lead for the first time after being down 10-0 at halftime.

But Manning threw three interceptions, including one returned 35 yards for a touchdown in the fourth quarter that gave the Browns a 20-16 lead.