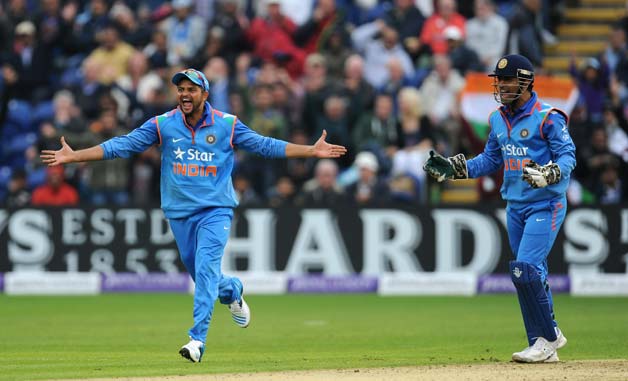 Struggling for runs in the ongoing ODI series against South Africa, under-fire Suresh Raina has got the much-needed backing of skipper Mahendra Singh Dhoni, who advised the middle-order batsman to give himself a bit more time before unleashing his big shots.

“More than the form he needs to give himself a bit more time. He’s gone in and played the big shots. Whenever you go in you actually have more time than what you think. I’s important for him to play a few deliveries,” said Dhoni at the post-match press conference after India lost the third ODI by 18 runs Sunday night.

The Uttar Pradesh left-hander was dismissed for ducks in the last two games after scoring 3 in the series opener at Kanpur. He did not have a great time in the preceding T20 series as well against the visitors.

Talking about Sunday’s game that India lost by 18 runs after failing to chase South Africa’s 270 on a slow pitch, Dhoni said the wicket became increasingly slower as the game and made life difficult for the batsmen.

“In the first half, the wicket played differently and as the game progressed, it became more and more difficult. If the wicket had not changed, 270 was a very good effort by our bowlers. But it became slower and we were not able to play the big shots.

“I hope you have heard what I said (in the din) yeh bandh nahi hoga, aag laga ke chod diya (This won’t stop, a fire has been lit and left alone),” he said jokingly about the din created by the Saurashtra Cricket Association (SCA) officials.

“I thought it was a very good effort by the bowlers. I thought it was a good wicket to bat on, the spinners did not get much assistance but they bowled well. As I said, it got slower and slower there was a bit of reverse swing. The fast bowlers used the extra fielder in the end quite nicely. If the wicket had not got slower, 270 was a par score,” he explained.

Dhoni, who made 47 and also added 80 runs with his deputy Virat Kohli – who top-scored with 77.

The Indian skipper rued that not enough runs were scored in the first 10 overs when openers Rohit Sharma (65) and Shikhar Dhawan (13) batted and then between 30 and 40 overs when he and Kohli got together.

“I don’t think we got enough runs in the first 10 which was a crucial phase with the wicket getting slower. And 30th to 40th again was another crucial period. We wanted to bat quite late and at the same time we started playing the big shots close to the 37th over.

“But though I and Virat were set we were not able to connect and play big shots. We never middled anything. Also not to forget the outfield over here is big. It was a tough one, especially with less pace on offer and you have to play the big shots,” Dhoni said.

Asked about him coming up the order by one rung, at no. 4, he said that he believed in not sticking to a set batting order and, instead, improvising as per the situation’s demands.

“I want to bat up the order but I also want people who can contribute down the order, so I have to mix and match it. If I have enough deliveries to bat then I can play the big shots. That’s the thinking behind it.

“The other batsmen, we might have to accommodate according to that. They may score at times and may not score but the good thing is they will get experience batting down the order as I feel at times the Indian batting order gets quite rigid. When you bat down the order you will know what are the difficulties,” he said.

“I won’t say it’s easy to bat up the order but they always have the cushion of 3 or 4 batsmen behind them, so you can always play big shots, but once you are batting at 5 or 6 you know no. 7 is quite thin and when you are looking to play the big shots you have to back yourself and say I can’t mistime this. These are the pressures you experience batting down the order,” Dhoni explained.

Asked about Kohli, he said his deputy has never been out of form in the series and that the team was still searching for the ideal no. 7 in the line-up who can come out and play big shots.

“He’s (Kohli) not somebody who is out of form. He got run out in a few games. We wanted to try him out at no. 4 and he got run out and it became slightly more difficult for this line up. The good thing is Ajinkya Rahane batted really well when he got the opportunity to bat higher up. He can play authentic cricket shots and can exploit the field well.

“But in this game I felt it was important for Virat to bat at 3 and that’s the slot he will generally bat. We are still looking for someone at no. 7 who can play big shots. We also have to play five bowlers,” Dhoni said.

He hinted that the three-spinner strategy, employed in this game by drafting in Amit Mishra to complement Harbhajan Singh and Axar Patel, had worked well.

“Quite a few times our fast bowlers have not bowled their full quota of 10 overs if you see the stats you are inclined to use the spinners. Also Mishra has done really well. He’s somebody who is getting us wickets also. You want to take wickets in middle overs to put pressure on the opposition,” Dhoni said.

“That’s the reason we included an extra spinner and I think the three-spinner strategy is working, but still the crucial slot is the no. 7 slot especially with Raina not scoring it becomes a bit difficult.”

He also hoped Patel would eventually come good with the bat and fulfill his potential to be a good no. 7 batsman.

“It takes time at international level, especially for people batting lower down. As a bowler he got hit in one of the games, but otherwise has been good. We all know he can bat and with more games under his belt and getting to play a few more deliveries off the fast bowlers, hopefully he will keep getting better. Definitely at no. 7 you need batsmen to play big shots. Otherwise the batting line-up looks very thin,” Dhoni concluded.