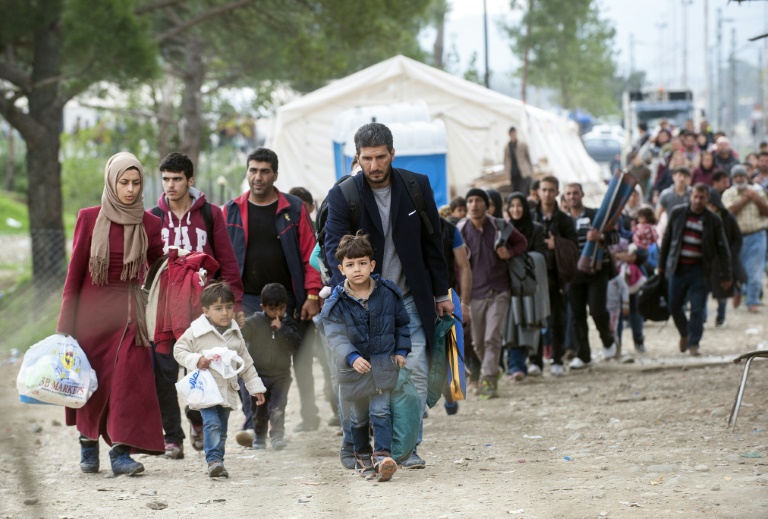 Thousands of migrants defied heavy rain and tightened border controls to stream into the Balkans on Monday, as Germany braced for anger at an anniversary rally of the anti-refugee PEGIDA movement.

Tensions have built along the migrant trail after Hungary shut its key borders with razor wire — diverting the flow west to Slovenia, which in turn has also limited arrivals, along with Croatia.

On Monday thousands of refugees were battered for hours by cold heavy rain as they waited at one of the bottlenecks, on the Serbia-Croatia frontier, where families in plastic ponchos huddled around fires and children walked barefoot in the mud.

Aid workers warned of dire conditions for pregnant women and a situation threatening to get “out of control”, before Croatia opened the border to let in the 2,000-3,000 stranded migrants in the late afternoon.

Amnesty International said Croatian police had also left some 1,800 people, including hundreds of children, stuck in the rain overnight near the Slovenian border and criticised the EU members’ “race to the bottom in terms of how they deal with the refugee crisis”.

Despite such hardships, there has been no let-up in the numbers of people seeking safer lives in Europe.

More than 20,000 migrants have crossed from Macedonia into Serbia since Friday, according to the UN refugee agency.

More than 600,000 people have crossed the Mediterranean this year, a dangerous journey that has left more than 3,000 dead or missing.

The ultimate goal for many is the EU’s biggest economy Germany, which expects to take in around one million refugees this year, and where Chancellor Angela Merkel’s open-door policy has sparked an angry backlash.

Two days after a man with a neo-Nazi background stabbed a pro-refugee politician in the neck, badly wounding her, Germany’s anti-refugee PEGIDA movement was planning a mass rally on Monday to mark its first anniversary.

Police expected thousands to join the “Patriotic Europeans Against the Islamisation of the Occident” demonstration in Dresden in the former communist East, as well as a large antifascist counter-protest, from 1600 GMT.

PEGIDA activists have accused Merkel of “treason” and last week carried a mock gallows with her name on it.

The chancellor on Monday urged people to “stay away from those with hate in their hearts”.

One of several thousand counter-demonstrators gathering, 65-year-old Petra, said that “racism and neo-Nazis are being tolerated and they feel strong”.

“It’s getting worse and that’s why things like this happen,” she said, referring to the knife attack. “I worry about violence tonight.”

Anti-foreigner sentiment motivated the bloody attack in the western city of Cologne on Saturday when a 44-year-old man used a hunting knife to stab mayoral candidate Henriette Reker, 58, who has been active in helping refugees.

Reker went on to win Sunday’s election with an absolute majority.

Interior Minister Thomas De Maiziere said the attack had left him “speechless” and also pointed to a tripling of attacks against asylum seekers since last year that had left more than 40 people injured.

Tensions have also flared inside some crowded German migrant shelters.

In Hamburg, an 18-year-old Afghan man suffered a head wounds after a mass brawl involving 40 to 50 people overnight. Police arrested two Eritreans and an Iranian.

The migrant influx has boosted support for populist right-wing parties in other European countries, including Austria.

A Swiss populist party known for its virulent campaigns against immigration, the EU and Islam won a record number of seats in parliamentary elections on Sunday.

The mayor of the French city of Calais meanwhile suggested Monday that the army could be brought in to watch over a slum, the so-called “New Jungle” camp, where some 6,000 migrants are camped out hoping to make it to Britain.

In Germany, Merkel has faced a dip in opinion polls and a rebellion in her own conservative ranks, especially in the southern state of Bavaria, the main gateway for migrants.

Hoping for Turkey’s help in slowing the influx, she held talks with President Recep Tayyip Erdogan in Istanbul on Sunday.

The EU wants Turkey to tighten border security and house more refugees in return for billions in financial help, visa liberalisation for Turkish citizens and an acceleration of its stuttering drive for EU membership.

But Turkish Prime Minister Ahmet Davutoglu said on Monday his country would not host migrants permanently to appease the EU.

“We cannot accept an understanding like ‘give us the money and they stay in Turkey’,” he said. “Turkey is not a concentration camp.”