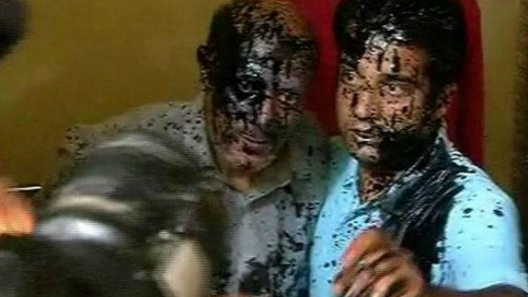 MLA Rashid was in the capital to protest against the death of a trucker over alleged rumours of cow slaughtering.

The attackers blackened the MLA’s face with black paint and mobil oil when he was holding a press conference at Press Club in New Delhi along with relatives of the two truck drivers who were burnt by a mob at Udhampur in Jammu region on October 9.

Two people were detained by the police and Rashid had to take refuge inside the Press Club till additional force came to his rescue.

Jammu and Kashmir Chief Minister, Mufti Mohammad Sayeed condemned the attack and said, “In a vibrant democracy like India, we need to have courage to respect dissent and provide space to different points of view. The spate in unpleasant incidents such as this is most disturbing.”

Attack on Eng. Rashid is unacceptable & condemned in the strongest possible terms. This climate of intolerance & violence is very worrying.