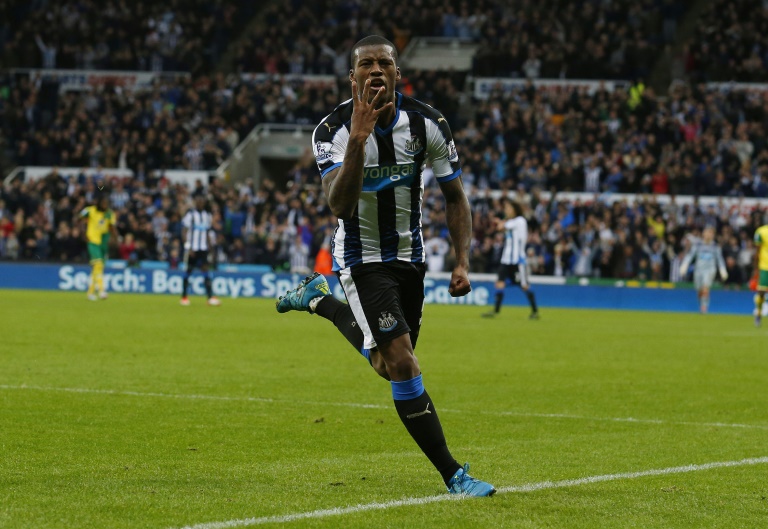 Wijnaldum was a member of the Holland team that failed to qualify for Euro 2016 earlier in the week, but he shrugged off the disappointment with a brilliant quadruple that eased some of the pressure on Newcastle manager Steve McClaren.

Ayoze Perez and Aleksandar Mitrovic also found the net, while Moussa Sissoko played his part with four assists, as Newcastle secured a league victory at the ninth attempt ahead of next weekend’s trip to northeast derby rivals Sunderland, who replaced them at the foot of the table.

Norwich were 3-2 down at half-time, having scored through Dieumerci Mbokani — making his full league debut — and Nathan Redmond, who also hit the post in the second half.

But despite a strong start to the second period they ended up well beaten, leaving Alex Neil’s side just three points above the relegation zone in 16th place.

Newcastle showed four changes to the team thrashed 6-1 by Manchester City on their previous outing — in which Sergio Aguero had scored five goals — with Rob Elliot notably replacing Tim Krul in goal after the Dutchman ruptured knee ligaments on international duty.

The hosts went ahead in the 14th minute when Sissoko picked up a loose ball on the edge of the box and threaded a pass through to Wijnaldum, a close-season signing from PSV Eindhoven, who steered a low shot into the bottom-left corner.

Robbie Brady sounded the Norwich revolt, cracking a shot against the post from 30 yards, and the visitors equalised in the 20th minute when Martin Olsson’s delicious left-wing cross was stabbed home by Mbokani.

Wijnaldum restored Newcastle’s lead six minutes later with a downward header from Sissoko’s clipped cross and Perez made it 3-1 when he found the bottom-left corner at the second attempt following a block by Olsson.

But Newcastle’s defensive frailties were exposed again just 48 seconds later when Olsson’s deep cross from the left was adroitly side-footed home on the volley by Redmond.

McClaren sent Vurnon Anita on for Cheick Tiote at half-time and he had reason to thank Wijnaldum for a third time when the Holland international cleared a header from Newcastle old boy Sebastien Bassong off the line.

Bassong’s chance arrived amid a spell of sustained Norwich pressure that spread jitters throughout the home ranks and visiting manager Neil added further attacking guile to his team by sending on Wes Hoolahan for Alexander Tettey.

But it was Newcastle who struck next with a goal of exceptional quality.

Sissoko led a break from Newcastle’s right-hand corner flag that culminated in him flighting a pass to Mitrovic, who chested the ball down, let it bounce, and lashed it past John Ruddy with his left foot.

Two minutes later it was 5-2 as Daryl Janmaat crossed from the right for Wijnaldum to head home his hat-trick goal.

Redmond then cracked a low shot against the post, but Wijnaldum had saved the best for last, cutting in from the left and smashing a 25-yard shot inside the right-hand post.