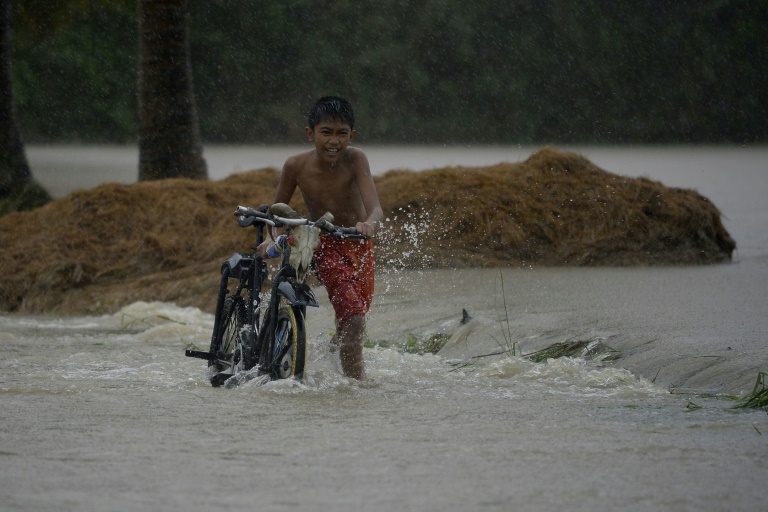 The slow-moving typhoon unleashed torrential rain over three major mountain ranges on Sunday and the runoff has since swamped the vast rice-farming plains north of Manila, rescue officials said.

About 70 villages are under water in the spreading floods, with many residents calling for rescue from small numbers of military, local government and volunteer rescue units, said Nigel Lontoc, a regional rescue official.

“The floods are fast rising and some people are now on their rooftops,” Lontoc told AFP.

“The water is now too deep even for big military trucks, so our people are trying to reach them using rubber boats,” he said, adding there were only 10 teams at their disposal at the moment.

Lontoc said many thousands of people may be stranded in those villages, although it was too early to determine an exact number.

Among the flooded areas was Cabanatuan, about two hours-drive from Manila that is not normally hit by flooding, Lontoc said.

“Some residents pre-emptively evacuated, but others thought the water would not reach them so they got trapped,” he said.

One of the flooded villages on the outskirts of Cabanatuan was Jaen, a rice farming community of about 67,000 people, where water was up to the roof level.

About 20,000 people had left their homes across the typhoon-hit areas and were seeking shelter in government schools and other makeshift evacuation centres, according to the government’s disaster management agency.

Koppu lashed the northern town of Santiago with gusts of 150 kilometres (93 miles) an hour at dawn, the state weather service said.

That was much weaker than the 210 kilometres an hour the typhoon carried when it slammed into Luzon’s east coast before dawn on Sunday.

It was forecast to cut across the Cordillera mountain range before exiting the north of the main island of Luzon on Wednesday.

The government put the death toll at two and said more than 19,000 people remained at evacuation centres.

A 14-year-old was killed in a district of the capital after a large tree fell on his house at the height of the typhoon.

A 62-year-old woman died after a wall in her house collapsed due to heavy rains in Zambales province on Saturday night.

Schools were closed amid stormy weather in Manila on Monday, although the capital was not badly impacted.