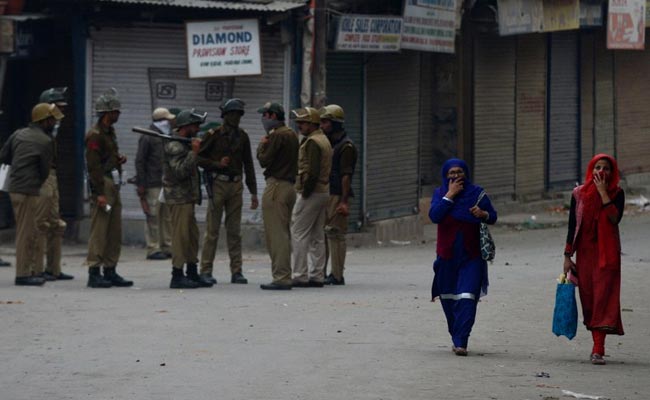 The valley is tense again as separatist groups have called for a shutdown in Kashmir today to protest against the death of a truck driver who was attacked with a petrol bomb in Udhampur following beef rumours around 10 days ago. Curfew has been imposed in parts of Srinagar after clashes broke out on October 18, hours after the news of trucker’s death.

Police have restricted movement in parts of the city ahead of Zahid’s funeral and the separarists have been taken in house arrest.

On Sunday, angry protesters hurled stones at the police, who used tear gas and batons to drive them back at a village in Anantnag district.

Zahid suffered over 60 per cent burns after he was attacked with a petrol bomb and his truck was set on fire on October 9. The attack was carried out in Jammu’s Udhampur after rumours that three cows were killed in the area.
Officials said tests revealed that the cows had died due to food poisoning and the rumours of slaughter were allegedly created to create communal tension in the Hindu-majority area.

Expressing concerns over Zahid’s death, Chief Minister Mufti Sayeed said, “I have no words to condemn the dastardly act which consumed the life of a poor and innocent young boy for no fault of his”.

NC leader, Omar Abdullah, who had met Zahid and his family in the hospital, said it was a “needless death” in the name of beef ban for which the “BJP and its allies” were responsible.

And to think that all the state Govt could do was to throw 10,000 rupees at #Zahid & wash it's hands off the whole thing #BeefMurder

Oppressed cousin of the victim said, “Why did they not punish the accused? I returned the compensation to Mufti saheb (chief minister Mufti Mohammad Sayeed). Nobody from administration or government approached us.”
The controversy over beef had started with a High Court order to enforce a decades-old law banning cow slaughter and the sale of beef in the state.