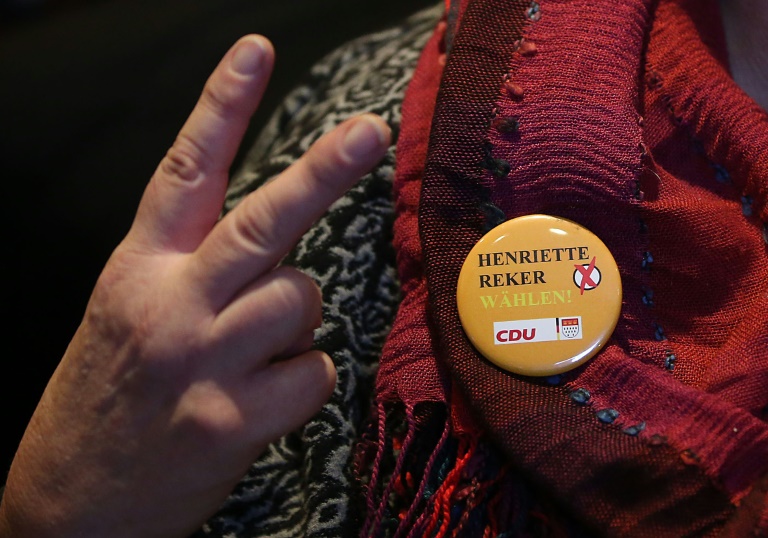 Pro-refugee politician Henriette Reker was elected mayor of Cologne on Sunday, a day after being stabbed in the neck while on the campaign trail in an attack that shocked Germany.

Reker, who is recovering in hospital after being seriously injured in what police labelled a “racist, political” attack, won 52.6 percent of votes cast, final results showed, putting her on track to becoming the city’s first female mayor.

“Victory! We are delighted for Henriette Reker,” her campaign team said in a tweet, calling her win “a new start for Cologne”.

Trailing a long way back in second place was Jochen Ott of the centre-left Social Democrats who secured 32 percent of the votes.

Standing as an independent, though close to the ruling Christian Democrats (CDU) of Chancellor Angela Merkel, Reker has become Germany’s most prominent victim of a growing backlash against a record influx of refugees this year.

The 58-year-old trained lawyer was largely unknown at the national level before Saturday’s attack, which was widely condemned with Merkel herself expressing her “shock” at the incident.

For the past five years, Reker has been responsible for running refugee services in Cologne, Germany’s fourth-largest city with 980,000 inhabitants including a sizeable Muslim minority.

In charge of accommodating asylum-seekers from Syria and other war zones, she has housed them in sports halls, former commercial spaces and other sites, and has called for their social integration.

The attack against her came as Germany is struggling to cope with a record inflow of asylum seekers after Merkel said the country would open its doors to Syrian refugees.

Merkel’s welcoming stance has provoked a backlash among her conservative allies and sparked protests among the far-right.

Reker’s attacker, a 44-year-old unemployed man known to be close to the extreme right in the 1990s, was arrested at the scene of the crime.

He had a racist motivation for the stabbing, Cologne police said.

According to Der Spiegel magazine, the suspect told police that “foreigners are taking our jobs” and warned that Islamic Sharia law would soon hold sway in Germany.

Reker was said to be in a satisfactory condition in hospital on Sunday.

“As things stand, everything is going normally,” the regional Rheinische Post quoted a medical expert as saying.

Four other people were also wounded, one seriously, in Saturday’s stabbing, which happened at a CDU information stand in the city.

More than 630,000 people fleeing war and misery in the Middle East and Africa have landed on Europe’s shores so far this year.

Most of the refugees and migrants are trying to get to Germany, Europe’s economic powerhouse, which has said it expects up to a million asylum seekers this year.

As a result of the influx, German authorities have warned of a rise in unrest, with the country’s domestic spy chief Hans-Georg Maassen saying last month: “What we’re seeing in connection with the refugee crisis is a mobilisation on the street of right-wing extremists, but also of some left-wing extremists.”

A recent spike in attacks against asylum homes has added to concerns, while security forces are also keeping a close eye on the resurgent anti-Islamic PEGIDA movement in eastern Germany, which is to hold a rally on Monday to mark its first anniversary.

The anti-immigration Alternative for Germany party finished in fourth place in the Cologne mayoral race with 4.0 percent of the vote.

Turnout stood at only 40 percent of eligible voters.