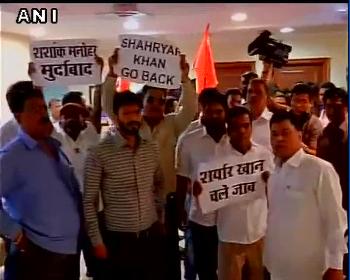 The BCCI-PCB talks have been rescheduled followed by the Shiv Sena protests. All the ten members who were earlier arrested in the same connected have been granted bail.

Shiv Sena workers on Monday stormed into the Board of Control for Cricket in India (BCCI) office to protest against the meeting with the Pakistan Cricket board to discuss the India-Pakistan bilateral series slated for December.
The Shiv Sainiks charged into the office chanting ‘Vande Matram’ and slogans against PCB chief Shahryar Khan.

They cornered BCCI president Shashank Manohar and protested saying they will not allow any cricket ties with Pakistan.

Meanwhile, IPL chairman Rajeev Shukla has strongly condemned the attack on the BCCI’s headquarters by Shiv Sena workers who were protesting against the Board president Shashank Manohar’s scheduled meeting with Pakistan Cricket Board chief Shahryar Khan.

BCCI is a responsible body and will not do anything against national interest. Cricketing decisions should be left to BCCI.

Cricket is a gentleman's man and the spirit of the game expects same generosity and tolerance from those who love the game.

After the protests, the talks have been rescheduled and is likely to resume on October 20.

Hearing about incidents related to disruption of BCCI work in Mumbai. Cricket Board welcome to meet in Kolkata