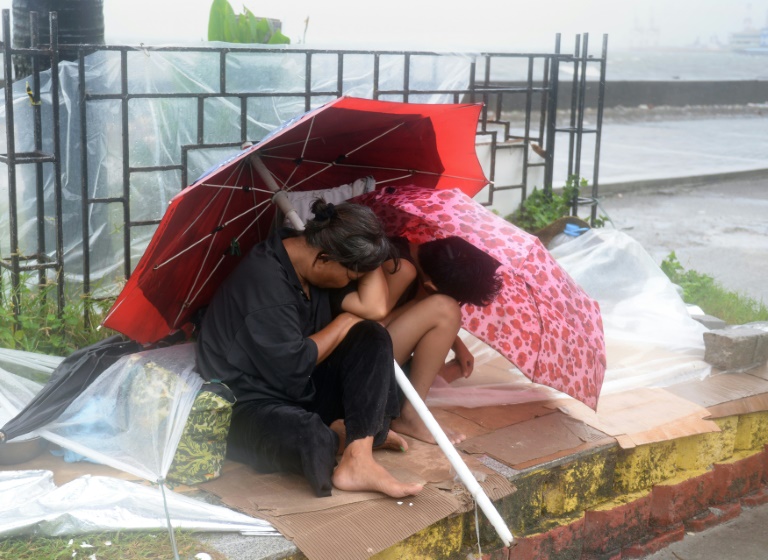 No casualties were reported but more than 15,000 people were evacuated from their homes, with more expected to flee as the slow-moving storm grinds its way northwards across the main island of Luzon before it is forecast to leave the country on Wednesday.

“We are fortunate because as of this time there has been no need for a major search and rescue operation,” Alexander Pama, head of the National Disaster Risk Reduction Council, told reporters in Manila late morning.

“I must emphasise that this is just the start. People must remain alert while we try to pick up the pieces in areas already hit,” Pama told reporters.

Koppu made landfall before dawn on the coast of Casiguran, a remote fishing town of 31,000 people, remaining near-stationary for seven hours and whipping the area with gusts of up to 210 kilometres (130 miles) an hour.

“Koppu tore off roofs of homes made of light materials. Rivers overflowed, and the roads to the area are blocked by downed power pylons and trees,” Nigel Lontoc, the deputy civil defence director for the region, told AFP.

ABS-CBN network aired footage of a hospital building with its roof ripped off and houses torn down near Baler, the provincial capital that draws surfers from around the world.

Lontoc also said the authorities cancelled a surfing competition in Baler for the weekend and ordered about 2,000 participants to remain indoors.

By late morning the state weather service said the typhoon’s intensity had weakened slightly to gusts of 185 kilometres an hour while moving northwest over the Pantabangan Dam in the southern foothills of the Cordillera, the country’s largest mountain range.

Despite the storm weakening, the authorities warned heavy rains could trigger flash floods and landslides in the region, home to more than 1.6 million people and known for its spectacular rice terraces carved on the slopes of towering mountains.

“We are strongly recommending forced evacuations in the Cordillera administrative region especially villages that are landslide- and flood-prone,” Pama said.

State weather forecaster Alczar Aurelio said Koppu was expected to weaken further into a severe tropical storm by Tuesday, but would only leave Luzon, home to half the Asian archipelago’s 100 million people, by Wednesday.

This was a day longer than earlier forecast, meaning the area could expect to be soaked with more rain, he added.

The authorities reported widespread power and communications disruptions across Luzon, with many roads and bridges also blocked by landslides, floods or fallen trees and power pylons.

Ferry services across Luzon were suspended amid rough seas while commercial aviation was also disrupted with 30 flights cancelled, two of them on international routes.

Residents of communities in the typhoon’s expected path were hunkering down under darkening skies, said Kate Marshall, part of an advance reconnaissance team of the International Committee of the Red Cross to the region.

“The rain is bad to intermittent and wind is picking up,” she told AFP from Solano, 75 kilometres north of Pantabangan town.

She said residents of Dupax, near the Pantabangan dam, were heading for the relative safety of schools and government buildings as floodwaters rose.

The weather service has also warned of storm surges, massive typhoon-generated waves smashing along coastal areas, but there have been no reports of these as the storm moved inland.

The deadliest and strongest on record, Super Typhoon Haiyan, destroyed entire towns in the central islands in November 2013, leaving more than 7,350 people dead or missing.