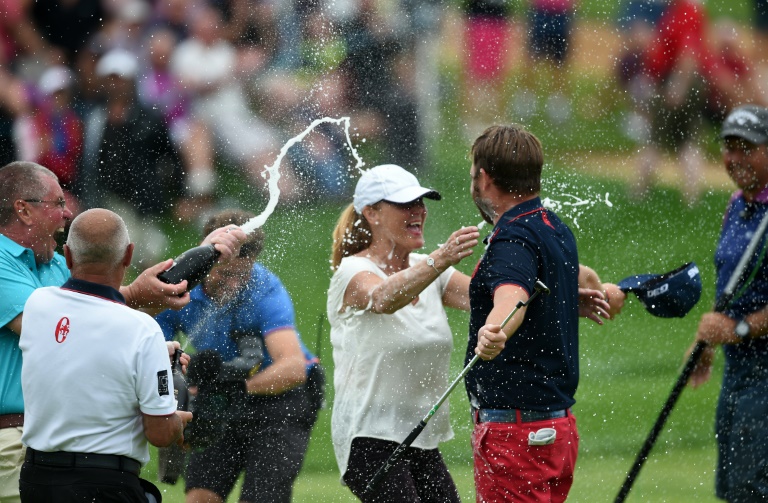 Andy Sullivan won his third European Tour title of the season at Vilamoura on Sunday, dominating the Portugal Masters throughout for a commanding nine-shot victory.

The 29-year-old Englishman, who won twice in South Africa earlier in the year, was already leading by five at the start of the day and he never looked like relinquishing that lead as he carded a superb 66 to finish a massive 23 under par.

Another Englishman, Chris Wood, took second place on 14 under after a final round of 68, with Anthony Wall, Trevor Fisher and Eduardo de la Riva another shot back in joint third.

Sullivan opened with three pars before holing from 25 feet for a birdie on the fourth and two-putting for another on the par-five fifth to reach 20 under par.

He was furious with himself for three-putting the 12th for par after finding the green in two, but the former Walker Cup made certain of victory with a birdie on the 14th.

He then picked up further shots on the 17th and 18th to put the seal on a brilliant wire-to-wire success.

The win moves Sullivan into the top 50 of the world rankings and means he has three wins in 23 events after not claiming a victory in his first 84 on the European Tour.

“Those two wins in South Africa were unbelievable, but to show your peers that you can do it in Europe as well is unbelievable and to do it in front of so many people from my home golf club,” Sullivan said.

“I didn’t really feel like I took that many risks until the end there and I just thought I’d play within myself and let them try and catch me.

“I’m not going to make any mistakes, and I didn’t today. Bogey free is unbelievable, it’s just what I wanted to do and it’s just incredible.”

Sullivan’s winning margin of nine strokes has only been bettered on the European Tour by South African Charl Schwartzel, who won the Alfred Dunhill Championship by 12 shots in 2013.

Tiger Woods produced the biggest winning margin of all time when he led home the field by 15 strokes at the 100th US Open in 2000.