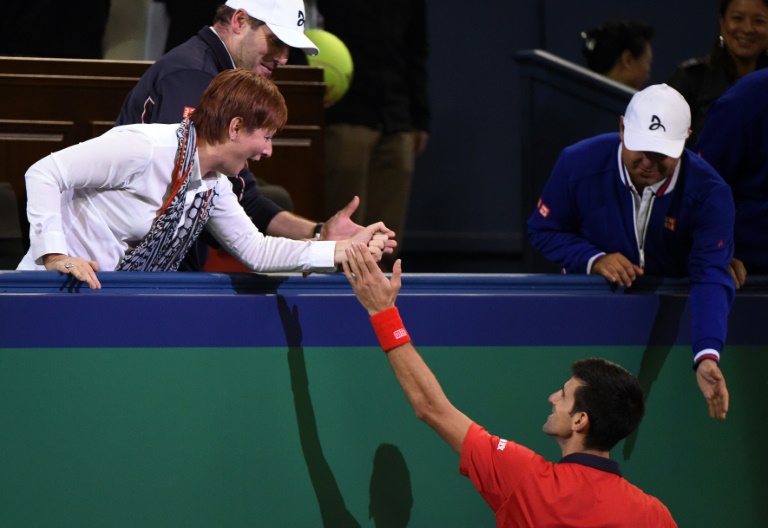 Novak Djokovic handed Jo-Wilfried Tsonga a 6-2, 6-4 beating on Sunday as the world number one claimed his third Shanghai Masters title to brutally strengthen his rule over men’s tennis.

The one-sided victory in one hour and 18 minutes at the Qi Zhong Stadium gave Serbia’s Djokovic his ninth trophy of a season in which he also won three out of four Grand Slam finals.

Djokovic’s serve was broken once but he broke the floundering Tsonga four times, collecting his 10th title in China on the back of a 17-match winning streak including 22 straight sets.

Djokovic was similarly dominant over Andy Murray in the semis and has looked untouchable in both Shanghai and Beijing, where he beat Rafael Nadal to win his sixth China Open last week.

“I think I’ve played the best tennis ever in these two weeks in terms of back-to-back. Honestly, that’s how I felt,” said Djokovic, who was showered with golden confetti at the victory ceremony.

“Energy-wise, I was great. I didn’t get tired. I always had plenty of intensity, concentration, high performance level from the first match in Beijing to today’s match.”

Top-ranked Djokovic has now increased his rankings points tally to 16,785, nearly double the 8,750 of second-placed Murray, and will finish world number one for the fourth time in five years.

Tsonga could only shake his head in admiration at the “really impressive” Serb after hardly managing to get a foothold in what was his second final of the year.

“Today there is nothing to say. He’s playing a lot better than everybody, I think. He’s really consistent,” said the Frenchman.

“You have to be in your best shape to beat him anyway, and everybody knows that it’s not easy to play your best tennis every match.

“Yeah, I think his level is just better than everybody for the moment.”

After a rock-star welcome complete with dry ice and ear-splitting music, Tsonga was quickly in trouble and he nervously netted on break points in the first and third games to go 3-0 down.

Some rare Djokovic errors gave Tsonga a break of his own but he immediately handed back the initiative to the Serb, who calmly served out to love for 6-2 and a one-set lead.

Tsonga hammered his second ace of the afternoon to get off the mark in the second set, and then two service winners and two more aces helped him neutralise a break point and go 2-1 ahead.

Djokovic held his first three service games to love, ramping up pressure on the Frenchman, but Tsonga held firm and he unleashed a crunching forehand to stay in front 4-3.

The Frenchman stared down five break points in the second set but on the sixth, he finally cracked with a double fault to put Djokovic 5-4 ahead and serving for the match.

The Serb did not need asking twice, grabbing the first match point when Tsonga put a lob long, and then soaking up the acclaim from the below-capacity, early evening crowd.

The Paris Masters and World Tour Finals in London now await the Serb — and no doubt more applause, more points and, on this form, more silverware.

“I’m not thinking about being unbeaten till the rest of the year. But, yes, that’s an option. It’s a possibility,” Djokovic said.

“But I’ll still try to keep the kind of a philosophy and approach where the next match matters.”