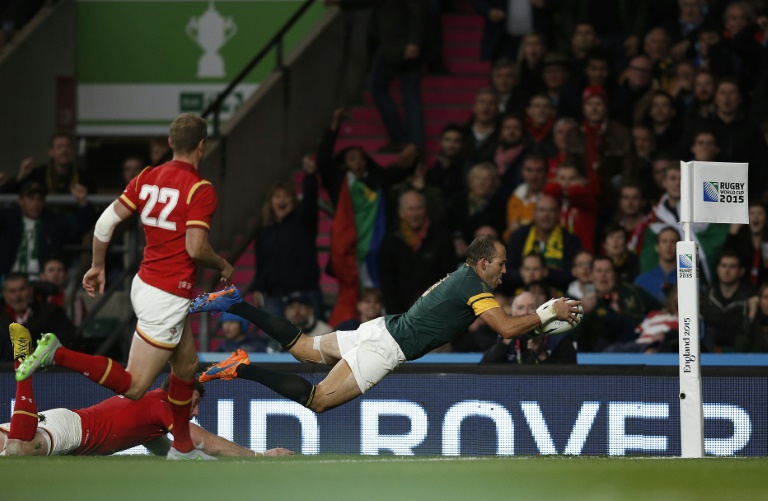 The two-time world champions trailed 19-18 at Twickenham when No 8 Duane Vermeulen’s flicked pass was collected by du Preez, who sprinted in on the blindside for a try that saw South Africa to a 23-19 win.

It might have been very different had Meyer not persuaded 2007 World Cup-winner du Preez, now 33, to end his Test retirement.

Meyer gave him his first start with the Blue Bulls in South Africa’s Currie Cup competition at the age of 19 and du Preez made his Test debut in 2004.

But du Preez retired from international duty after a shoulder injury restricted him during a disappointing 2011 World Cup for the Springboks which ended with a last-eight loss to Australia.

Du Preez headed to Japan to play for Suntory Sungoliath but, at Meyer’s urging, he returned to Springbok colours in 2013.

A knee injury sidelined him again in 2014 and nearly put paid to him being a member of the Springboks’ squad at this World Cup.

But having almost been ruled out himself, du Preez found himself promoted to captain the team after first-choice skipper Jean de Villiers (broken jaw) and lock Victor Matfield (hamstring) were injured during pool play.

“Fourie was brilliant,” said Meyer after Saturday’s thrilling and gruelling win against Wales.

“He is the most astute player I have ever coached,” the coach, who came under immense pressure after the Springboks started the tournament with a stunning 34-32 loss to Japan — the biggest upset in World Cup history.

“He is a tactical genius. He was always the guy organising the team.

“If you look at all the games South Africa play well, he is always playing. I will always pick him. His desperation to play for the team is amazing.

“He came up with that move (which led to the winning try) and the try was pure genius,” said Meyer, speaking before defending champions New Zealand were confirmed as the Springboks’ semi-final opponents after routing France 62-13 in Cardiff.

“He really wants to win. I have known him since he was a youngster and I have known it was the right call to make him captain. The team just followed him. He is a warrior and it showed tonight.”

Meyer, however, was also keen to pay tribute to a Springbok team featuring several relative novices at international level.

“I also want to take my hat off to the youngsters. To keep Wales out defensively was brilliant. I would go to war with them.”

Du Preez, who insisted there was no special name for the move that led to his try other than a call to Vermeulen to ‘go left’ in Afrikaans, said he could see Wales faltering as the game headed into the final quarter.

“It felt very similar to the 2011 game (when Australia beat South Africa 11-9 in a Wellington quarter-final), which we lost by one penalty” du Preez recalled.

“Round about 60 minutes, though, I could see a few of their (Wales’) guys lying down and I thought we have a lot of gas left, so I said, ‘let’s keep going’.”

He added: “They were starting to slow the game down, so I tried to tell our guys to take the game to them and go for the knockout punch.”