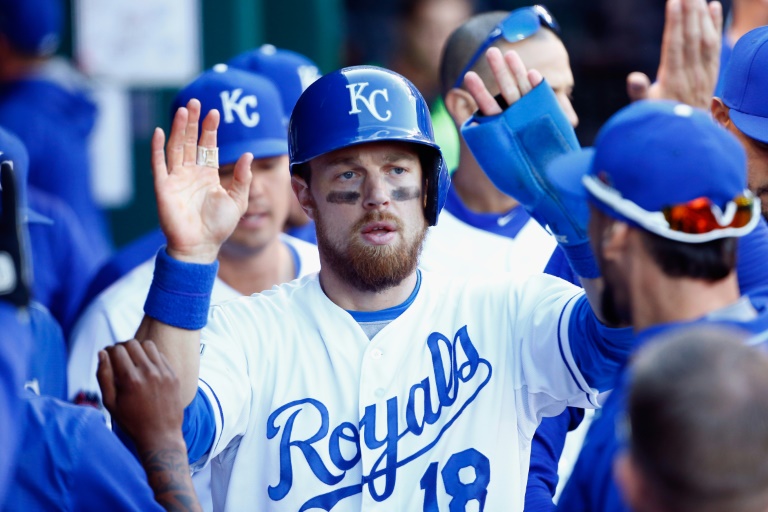 The Kansas City Royals rallied with five runs in the seventh inning to beat the Toronto Blue Jays 6-3 and take a 2-0 lead in the American League Championship Series.

With a berth in Major League Baseball’s World Series on the line in the best-of-seven set, the Royals were trailing 3-0 in Saturday’s clash when they finally got to Toronto starting pitcher David Price in the bottom of the seventh.

Price had retired 18 straight batters — a Blue Jays playoff club record — including striking out three in the sixth.

But the Royals launched a rally with Ben Zobrist’s shallow fly to right field.

Blue Jays second baseman Ryan Goins, running back, appeared to call for the ball and outfielder Jose Bautista slowed his run toward it. But neither caught it, and Zobrist had the Royals’ first hit since the first inning.

“We just needed to catch a break, and I felt like Zobrist’s ball was it and then we started rolling,” said Royals outfielder Alex Gordon, whose double in the inning scored the go-ahead run.

“I put my glove up and pretty much was saying ‘I’m going to make this play,’ and then I didn’t make the play, so it’s on me,” he said.

“I put my glove up. That’s pretty much our sign. It means for the outfielder to back off. Nothing can be said about it. I didn’t make the play.”

Lorenzo Cain then singled to right, Eric Hosmer singled to score Zobrist, Kendrys Morales grounded out to score Cain and Mike Moustakas snapped an 0-for-13 skid with a run-scoring single to tie it.

After Price struck out Salvador Perez, Gordon worked the count full before belting a double that scored Morales and chased Price.

Price insisted Zobrist’s hit “absolutely” did not impact him.

“I stay in the present,” Price said. “I don’t worry about what happened in the past. I focused on Cain and the next guys. It just didn’t work out.”

The outburst recalled the Royals’ five-run eighth inning in their game-four win over the Houston Astros in the previous round of the playoffs, as well as their rally from a four-run deficit in the eighth inning of last season’s wild card game.

“Once you do it once, you kind of get used to it,” Gordon said of the Royals’ ability to rally. “We just battle and never give up.”

They padded their lead with another run in the eighth, leaving the Blue Jays hoping a shift to Toronto for games three and four on Monday and Tuesday will signal a change in fortunes.

After getting on the board with a run in the third, Toronto added two more in the sixth when designated hitter Edwin Encarnacion’s single drove in third baseman Josh Donaldson and Bautista, who had walked, scored on a double from Troy Tulowitzki.

The winners of the series will face either the New York Mets or the Chicago Cubs in the World Series.

“We haven’t done anything yet,” Gordon warned. “We’re up 2-0 and that’s a good thing but it’s going to be a challenge up in Toronto.”