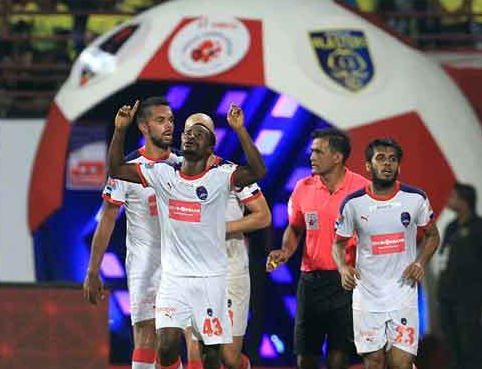 Substitute Gadze headed home a Florent Malouda cross as he timed his jump to perfection heading home from close range much to the dismay of the home fans and team’s owner Sachin Tendulkar, who graced the stands.

Dynamos now have 9 points from four games after their third win and straightaway jumped to the second spot in the league table behind Pune City FC. Dynamos despite having equal number of points trail due to an inferior goal difference.

In the fifth minute, Francis Fernandes provided a defence splitting through for Gustavo Dos Santos but the Brazilian’s first touch wasn’t a great one and by the time he took the second stroke, Bywater anticipated to collect the ball.

Peter ramage had a good game at the heart of the Blasters defence as he kept out the dangerous floaters sent from wide right by the former French international Malouda.

In the 43rd minute, a free-kick saw Robin failed to provide the finishing touches as it beat Bywater before going out.

Locked goalless at half-time, profligate Robin missed the chance of the match in the 67th minute after he had sights of an open goal from a rebound which he shot over.

Finally, it was Gadze, who brought smiles in the face of Dynamos manager Roberto Carlos with a perfect header.