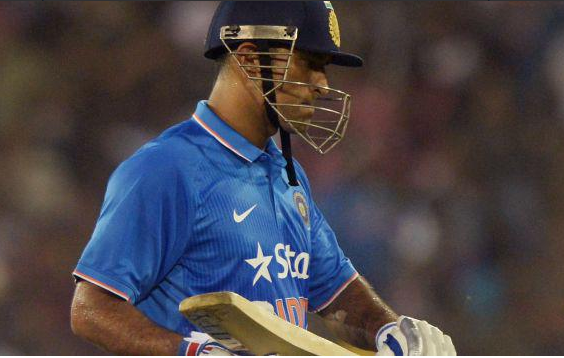 India’s formidable batsmen choked under pressure as South Africa relied on a disciplined bowling performance to clinch the third cricket One-dayer by 18 runs and take a 2-1 lead in the five-match series, here today.

India were cruising along comfortable before losing the plot in the last 15 overs with a flurry of wickets as they ended at 252 for six.

The rezig in batting order, with skipper MS Dhoni promoting himself up at number four and Ajinkya Rahane coming out to bat number six also did not work.

The tourists’ pace-heavy bowling attack, led by the lanky Morne Morkel who grabbed a brilliant 4 for 39, throttled the home side batsmen in the final stages.

Half centuries from Rohit Sharma (65) and Virat Kohli (77) and skipper Mahendra Singh Dhoni s 47 in 61 balls could not take India across the line.

After 35 overs, India were 162 for 2 but the as game progressed it gradually slipped out of their hands. Dhoni departed in the 41st over, trying to force the pace but was caught at third man off Morkel. The task got stiffer with 78 needed off 48 balls.

Though Kohli hit a few boundaries, the asking rate kept climbing and Suresh Raina was also dismissed going for a big one off Imran Tahir to leave the hosts at 206 for 4 in the 44th over.

And when Kohli and Ajinkya Rahane were dismissed by Morkel in successive balls in the 46th over, in identical fashion at long-on by David Miller, the task was beyond the hosts grasp.

Rohit, who was yet again in sublime touch, was lucky to be dropped by Morkel off Jean-Paul Duminy when he was on 18.

It was sitter and he went on to make his 27th fifty.

Rohit and Kohli ran the singles briskly and put on 72 runs for the second wicket before Rohit hit a return catch to Duminy.

Dhoni promoted himself a rung higher and provided the thrust with good running between the wickets and the target looked well in sight as he and Kohli added 80 runs.

The ODI skipper and captain-in-waiting nudged the ball into gaps, ran quick singles and hit the occasional boundary to keep India well in the hunt but their dismissals sealed India’s fate.