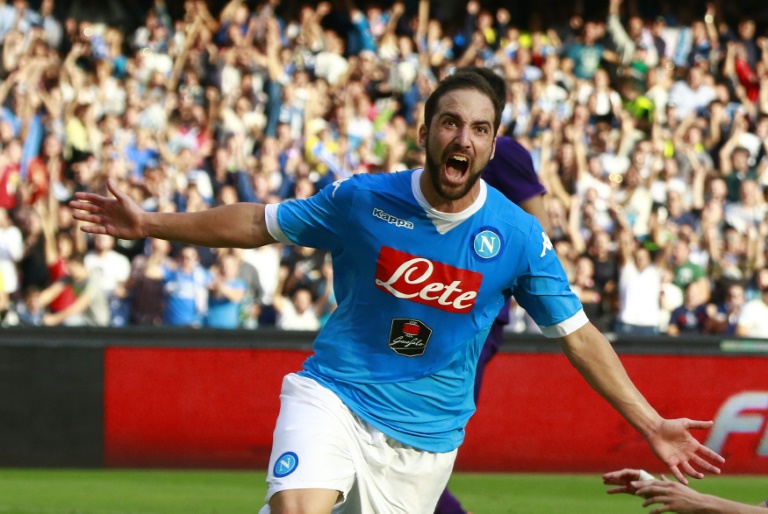 Gonazalo Higuain’s fifth league goal of the season helped Napoli to a precious 2-1 win over league leaders Fiorentina on Sunday as Mauricio Sarri’s men moved up to fourth place in Serie A.

Napoli welcomed Fiorentina to the San Paolo looking to maintain a recent purple patch that has seen Sarri’s side remain unbeaten in their last six outings.

Fiorentina were tough customers, but after Nikola Kalinic had levelled Lorenzo Insigne’s superb opener for the hosts, Higuain struck in the 75th minute to secure Napoli’s fourth win of the campaign.

Fiorentina, conceding just their second defeat, remain top but now have just a one-point lead on Roma and two on Inter Milan, who could go top of the league if they beat Juventus in the ‘Derby d’Italia’ later Sunday.

Napoli, runners-up in 2013 and who won the last of their last two league titles in 1990, have recently been touted as possible scudetto challengers.

But while Sarri applauded his side’s performance, he refused to be drawn on just how far Napoli can go.

“Fiorentina are the most technically gifted side in the league, so we did well,” he said.

“In the second half we lifted the tempo but Ilicic and Kalinic combined well for their goal.

“We had to dig deep mentally for our second goal. It was an intense game and the win didn’t come easily.”

He added: “Obviously we’re doing well, but there is so long to go and we have to simply focus on developing as a team.”

Paulo Sousa’s Fiorentina have been described as one of the most stylish teams in the league and were unlucky not to snatch a share of the points.

Fiorentina bossed the opening half but the deadlock was finally broken two minutes after the restart when Insigne beat Ciprian Tatarusanu at his far post after running on to Marek Hamsik’s superb defence-splitting pass down the left.

Minutes later Higuain spurned the chance to double Napoli’s lead when he bundled just over from close range.

Fiorentina appeared to be on their way to a share of the spoils after Croatia international Kalinic, who hit a hat-trick in a recent 4-1 romp over Inter, ran on to Josip Ilicic’s delivery to slot the ball past Pepe Reina down low.

But minutes later the stadium erupted when Higuain dispossessed Ilicic deep in Fiorentina territory, played a one-two with Dries Mertens and held off his marker to beat Tatarusanu down low.

Sousa applauded his side’s display and, like Sarri, refused to be drawn on La Viola’s title-winning potential.

“You can never be satisfied, we’re always working to improve, but I’m proud of the lads and their attitude to this game and a team that is technically and physically strong,” said Sousa.

“We hope to be competitive, today as in every other game. For me, creating this winning culture is (equivalent to) winning the scudetto.”

Elsewhere, Sampdoria’s promising start came to a shuddering halt with a 2-0 defeat at Frosinone, while Lazio were stunned 2-1 away to Sassuolo.

Frosinone grabbed just their second win of the campaign thanks to second-half goals in the space of a minute from Luca Paganini and Federico Dionisi.

Sassuolo were 2-0 up by the hour mark thanks to a Domenico Berardi penalty on seven minutes and Simone Missiroli’s 60th minute strike.

Felipe Anderson hit a consolation for Lazio on 67 minutes, but Stefano Pioli’s men were well beaten.

Atalanta, meanwhile, romped to 3-0 win over Carpi in Bergamo that came complete with a stunning corner kick goal from Alejandro Gomez.

Mauricio Pinilla gave the hosts a welcome eighth-minute opener after meeting Maxi Moralez’s curling delivery from the right to head past Carpi ‘keeper Vid Belec at his near post.

Belec was beaten again on the stroke of half-time in more spectacular fashion, Gomez hitting a superb corner that sneaked over the entire Carpi defence and into the far top corner.

Atalanta wrapped up the points when Luca Cigarini fired past Belec from the penalty spot on 63 minutes after Pinilla was fouled by Igor Bubnjic.