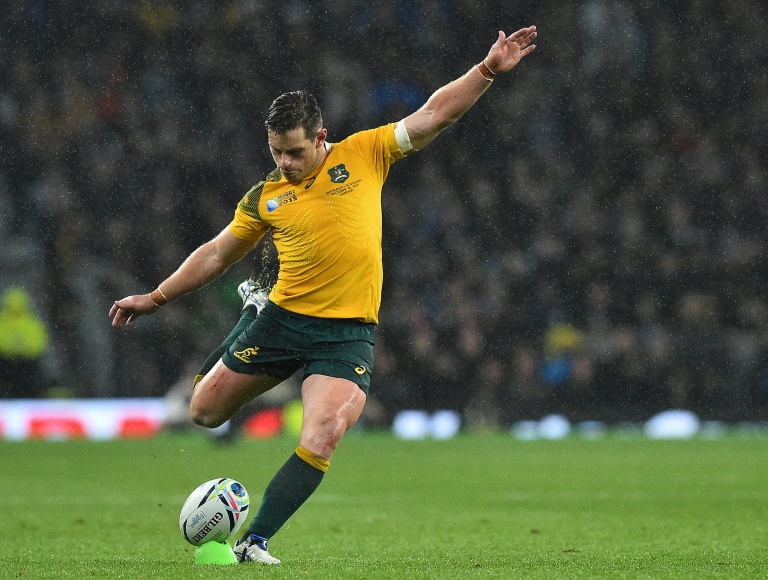 It had seemed Mark Bennett’s intercept try seven minutes from time had set up a huge World Cup upset by Scotland, who lost all five of their matches in this year’s Six Nations.

Bennett intercepted a pass from Wallaby replacement prop James Slipper and ran in under the posts for a try converted by Scotland captain Greig Laidlaw, who kicked 19 points in total.

But Australia, the 1991 and 1999 world champions will now face Argentina who beat Ireland 43-20 earlier, in next weekend’s semi-final.

Scotland’s defeat means the last four will be an entirely southern hemisphere affair.

“We were stuck in a dark spot for a while but we managed to get out of it which was very pleasing,” said Drew Mitchell, scorer of two of Australia’s five tries.

Australia had a measure of control at 25-19 heading into the final quarter.

Laidlaw missed the difficult conversion, but Australia’s lead had been cut to a point at 25-24.

Australia appeared to have wrapped up the match in the 63rd minute.

They won a line-out off a Scotland throw and outside centre Tevita Kuridrani, bursting through a gap in the cover, surged over for a try converted by Foley.

That gave Australia a 32-24 lead. But Laidlaw’s fifth penalty cut the lead heading into the last 10 minutes as rain started to pelt down upon Twickenham.

Australia, eight points down at one stage early on, were 15-16 behind at the break but rallied soon after when Scotland wing Sean Maitland was sin-binned for a deliberate knock-on.

The Wallabies were without two influential players in the injured duo of full-back Israel Folau and No 8 David Pocock.

But despite this, and losing two of their last three Tests against Scotland, Australia still started as odds-on favourites in the match in which skipper Stephen Moore and centre Matt Giteau became the seventh and eighth Wallabies respectively to win 100 Test caps.

Scotland made two late changes to their side, recalling hooker Ross Ford and lock Jonny Gray after the pair won their appeals against three-week bans imposed for a dangerous tackle against Samoa.

Australia had their first try in the ninth minute when Kuridrani burst clear and was then missed by Seymour.

Laidlaw got Scotland on the board with a 12th-minute penalty and five minutes later they scored a remarkably simple try.

Powerful carries by WP Nell and David Denton took them to within five metres of the Australia line before centre Peter Horne simply picked up and burst through a static Wallaby defence for a try under the posts.

Laidlaw’s conversion and penalty then made it 13-5 to put Scotland two scores in front.

But Scotland’s defence, so porous in a 36-33 win over Samoa, was soon breached again.

The ball was worked back from Foley to Kurtley Beale, in for Folau and his pass found wing Drew Mitchell on an overlap out on the left

Foley, however, again failed to convert and Scotland led 13-10.

But on the stroke of half-time Australia had their third try.

Giteau booted a kickable penalty into touch for a line-out and, from the ensuing driving maul, Michael Hooper crossed.

Foley, however missed his third successive goal-kick and Scotland were still 16-15 in front.

Maitland was yellow carded early in the second half for a deliberate knock-on.

That decision was made even worse for Scotland when it led to Australia’s fourth try, with Mitchell — off another line-out move, going into the space vacated by the sin-binned Maitland for his second try of the match.

This time, Foley converted to put Australia 22-16 in front only for scrum-half Laidlaw’s fourth penalty to keep Scotland in touch.

Foley replied in kind and then came the most dramatic finale possible.