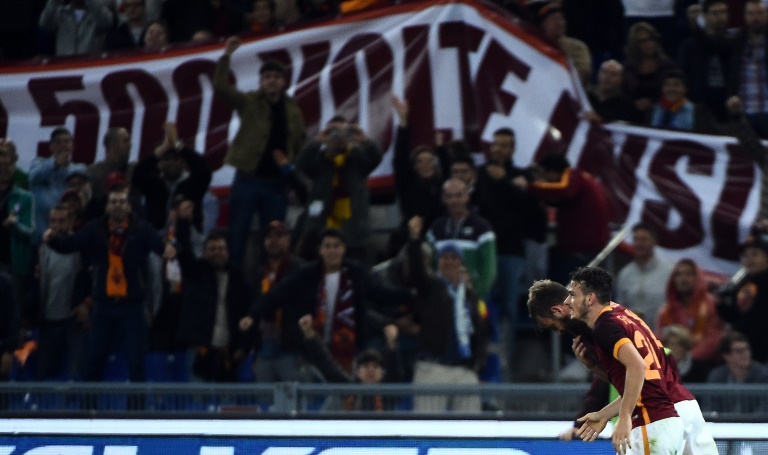 Daniele De Rossi marked his 500th appearance for Roma with a goal in his team’s 3-1 win over Empoli on Saturday as Rudi Garcia’s side moved into second place in Serie A.

The 32-year-old De Rossi found the target in the 59th minute after Miralem Pjanic had hit the opener with a superb direct free-kick three minutes earlier.

The Bosnian also played a key role in De Rossi’s goal when his corner was headed home by the midfield veteran.

Roma, playing without the injured Francesco Totti and Edin Dzeko, were 3-0 to the good in the 69th minute when Mohamed Salah found the net after being set up by Gervinho.

Empoli pulled a goal back through Austrian international Marcel Buechel in the 70th minute but the three points for Roma will be a huge boost ahead of their Champions League clash at Bayer Leverkusen on Tuesday.

The win took Roma into second spot in the table, one point behind leaders Fiorentina.

“When you win it’s always a perfect night, and I’m even happier I scored a goal especially when I don’t score that often,” said De Rossi, whose only regret was scoring under an empty ‘Curva Sud’.

A large section of the club’s hardline fans, who traditionally occupy the more colourful and lively ‘Curva Sud’ end of the Olimpico, have gone on strike to protest police restrictions in and around the stadium.

It has left the Curva conspicuously empty, and De Rossi added: “Tonight the goal under an empty Curva was a disappointment. We hope the situation can be resolved, it would have been the perfect present to mark 500 appearances.”

De Rossi added: “It’s an important win for us because Empoli are a tough side, they’re well organised and solid in midfield. Everyone struggles against them.”

On Sunday, Inter Milan face champions Juventus while Fiorentina are away to Napoli in the pick of the afternoon fixtures.