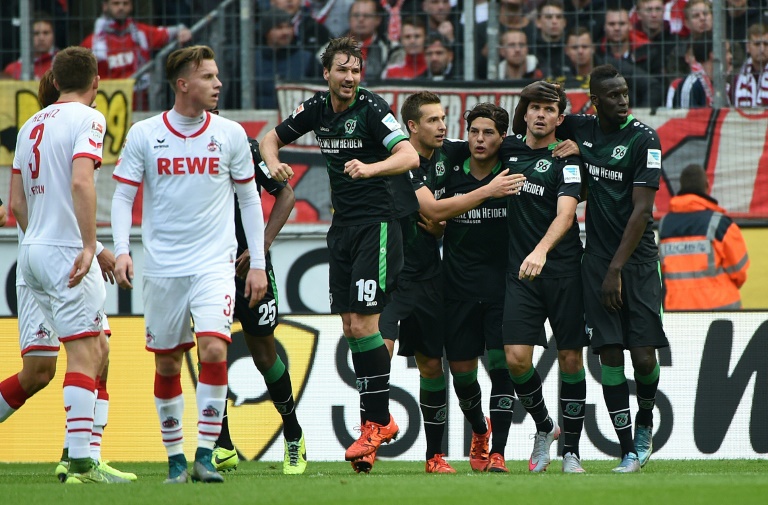 Hanover and Stuttgart climbed out of the Bundesliga relegation zone on Sunday thanks to controversial goals.

Hanover’s revival continued as midfielder Leon Andreasen’s winner sealed a 1-0 victory at Cologne, although replays showed there was a clear handball.

After Japan midfielder Hiroshi Kiyotake fired in a cross, Andreasen steered the ball home at the far post on 38 minutes with the help of his upper arm, despite furious protests from the Cologne defence.

“I offered to lend my glasses to the linesman, but he didn’t see it either,” fumed Cologne coach Peter Stoeger after referee Bastian Dankert missed the handball.

Hanover goalkeeper Ron-Robert Zieler pulled off a great save to deny Cologne’s French striker Anthony Modeste in the dying stages to rescue the win which left his team 14th in the table.

Hanover are now unbeaten in their last three games, which followed five straight defeats, while Cologne drop to sixth in the table.

Stuttgart shot up from 18th to 15th thanks to Daniel Didavi’s second-half winner which sealed their 1-0 victory at home to Ingolstadt, but replays showed he was in an offside position.

Stuttgart were without Serey Die for the last ten minutes after the Ivory Coast defensive midfielder was shown a second yellow card.

Mueller stole in front of Alejandro Galvez to control a Thiago Alcantara cross at the near post for his ninth of the season at the Weserstadion as Bayern made more Bundesliga history.

Bayern’s 999th Bundesliga win sets them up for their trip to face Arsenal in the Champions League on Tuesday.

It left the Bavarians seven points clear at the top of the table from nearest challengers Borussia Dortmund, who won 2-0 at Mainz on Friday.

Dortmund coach Thomas Tuchel returned to face his former club in Mainz and saw Marco Reus put the visitors in front in the first half before Henrikh Mkhitaryan added a second.

Germany striker Max Kruse scored his first career hat-trick as Wolfsburg climbed up to fourth with a dramatic 4-2 win at home to Hoffenheim at the Volkswagen Arena.

Wolfsburg opened the scoring after just 41 seconds when Julian Draxler squared for Kruse to score his first goal since signing from Borussia Moenchengladbach in the summer.

Schalke 04 are third, just a point behind their Ruhr rivals Dortmund, after Max Meyer struck a stoppage-time winner to see off Hertha Berlin 2-1.

Benedikt Hoewedes had earlier headed the Royal Blues in front but Salomon Kalou’s 73rd-minute header looked set to earn Hertha a share of the spoils.

Gladbach continued their revival since Andre Schubert replaced Lucien Favre in the dugout as they romped to a 5-1 win away to Eintracht Frankfurt.

Bayer Leverkusen were held to a 0-0 draw at Hamburg and promoted Darmstadt’s good start to life in the top flight continued with a 2-0 victory at Augsburg.

Sandro Wagner and Peter Niemeyer both netted in the first half as Darmstadt climbed into the top half of the table and left Augsburg, who are in this season’s Europa League, bottom of the table.