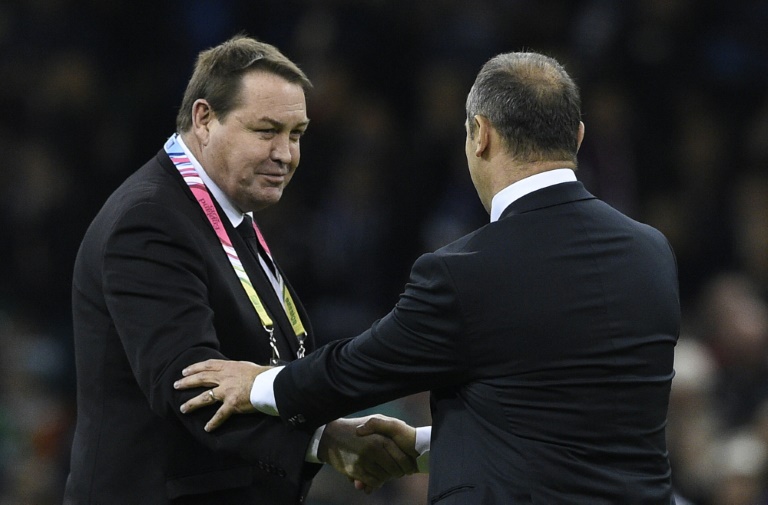 Steve Hansen aimed an ominous warning at South Africa Sunday saying his All Blacks scintillating performance against France was not yet their best.

The defending champions move on from their 62-13 crushing of France to play arch-rivals South Africa in a Twickenham semi-final next weekend.

Hansen described the All Blacks record victory over France on Saturday as “a Test we will all remember” and the tough taskmaster allowed himself a fleeting moment of satisfaction before focusing on the shortfalls.

“There were still things we can do better and that’s one of the hallmarks of this team to improve all the time,” he emphasised in a review of the emphatic quarter-final dismissal of France.

“Can we improve on it? That’s not the point. The point is we’ve got to strive to. We probably left two or three tries out there on the park,” he said listing turnovers and lineouts as areas to be addressed.

The All Blacks were ruthless from the kick off and never eased up in their nine-try battering of the French.

Such was their commanding performance that France coach Philippe Saint-Andre likened it to having “six All Blacks to every one Frenchman.”

Leading the way were the two survivors of the 2007 World Cup, Richie McCaw and Dan Carter, who finally laid to rest the nightmare of that quarter-final capitulation when France won 20-18.

The All Blacks also wanted payback for losing to France in the 1999 semi-finals.

“There’s a lot of people that suffered in ’99 and suffered in 2007 and they couldn’t be here. It was for this group to say ‘we’ll fix that up’,” Hansen said.

“That was special to be able to do that. Special because we’re now in the semi-finals, that’s better than going home because that would be not have been too pleasant. And the quality of the performance was special, so those three things make it a Test we will all remember.”

The focus is now firmly fixed on the Springboks who earned their passage into the last four with a late try to beat Wales.

It was a performance that impressed Hansen. “They showed a lot of mental fortitude” he said.

“They’re going to be tough and you wouldn’t expect anything else from the ‘Boks.”

Hansen believes he knows what to expect from South Africa.

“It’ll be big, it’ll be hard and it’ll be tough. They’ll carry strong, they’ll probably kick a lot and we know they’ve got a running game as well.”

But he doubted the Springboks would learn too much from studying how the All Blacks ran France off the park.

“We will have to re-invent some of the stuff that we did.

“The strategies on how you’re going to do that depend on who you’re playing so that will be the subtle difference.”