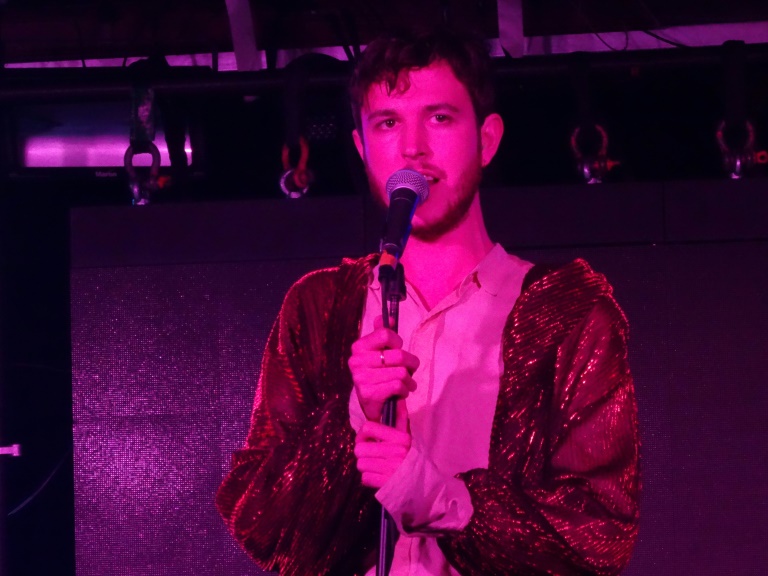 To create the dreamy electropop sound of his band Oscar and the Wolf, frontman Max Colombie watches movies — and turns off the sound.

Oscar and the Wolf has been a sensation in the band’s native Belgium and on Thursday night made its US debut at the CMJ Music Marathon, the annual week in New York where hundreds of bands perform in search of music industry recognition.

Colombie said he writes the songs — marked by a dark backdrop but danceable beat — by cutting scenes from movies and erasing the sound, allowing him to imagine a mini-soundtrack.

“They are usually dark movies and there always has to be a sad part,” he told AFP ahead of his show.

But he deadpanned: “I could write music on ‘Bridget Jones’ if I wanted,” observing that the franchise about the frumpy Londoner had plenty of sad scenes.

He also composes to paintings by the Flemish masters, saying that the momentous themes of death, love and the supernatural naturally lent themselves to song.

With an airy yet trembly voice that occasionally recalls Radiohead’s Thom Yorke, Colombie has a magnetic if non-traditional stage presence which alternates from cool-guy poses to carefree dancing with his arms swaying in the air.

Colombie enjoyed an unexpected break several years ago when he emailed unsolicited songs to British singer Ben Howard, who not only replied but invited him to open for his show in the Netherlands — which meant Colombie needed a backup band.

“I’m like, dude, that’s in two weeks! And then actually I looked for people and we did our first gig in a 600-capacity venue,” he said.

Oscar and the Wolf’s debut “Entity” was 2014’s Album of the Year at the Flemish-oriented Music Industry Awards and the band will later this month play at the 20,000-capacity Sports Palace in Antwerp.

“Sometimes I don’t sleep because of that. It’s the place where Rihanna and Beyonce come,” he said.

“I think I’ll have fun just to play the diva for an hour and change clothes every 20 minutes.”

But the US debut was far smaller, with only a couple hundred spectators at a secondary stage of historic Webster Hall.

Colombie voiced pride in Stromae’s success but played down the idea of a “Belgian wave” in music, saying the concept was antiquated in the Internet era.

Oscar and the Wolf was successful thanks to radio playtime, with many Belgian fans not realizing they were local, said Colombie, who sings in English.

“I don’t like that people would say, ‘That sounds Belgian.'”

Launched 35 years ago with the name College Music Journal, the CMJ Music Marathon is credited with launching the careers of artists such as Lady Gaga and R.E.M.

While most performers are relatively obscure, Neon Indian — a prominent electronic act from Texas — used CMJ to launch a tour with an innovative light show.

Neon Indian, a leading force in the chillwave movement of downtempo synthesizer pop, partnered with Microsoft, which set up five sensors through its Kinect technology that tracked the five band members’ movements, turning them into explosively colorful screen projections.

Neon Indian’s principal member Alan Palomo said that the real-time kaleidoscope aimed to create a “symbiotic relationship between the music we’re playing and the visuals.”

“In so many cases you just pop in a DVD and it’s like the audience starts watching TV in the middle of your set,” he told reporters before Wednesday’s show in Webster Hall’s main ballroom.

For spectators at the new show, “Not only are they receiving audio information, but now there’s visual information as well,” Palomo said.

Playing eight shows over five days, one of the hardest-working acts at CMJ is Car Seat Headrest, the musical and life odyssey of 22-year-old Will Toledo.

Starting as a teenager, Toledo put out 11 homemade albums and posted them online, many of them raw ruminations on depression, death and drinking.

Car Seat Headrest started a show Thursday with a more than 15-minute song that opened with the jamming feel of prog-rock and burst into grunge befitting Toledo’s home of Seattle, before climbing subtly down.

After developing an underground following, Car Seat Headrest recently signed to Matador Records, one of the most influential US independent labels, and will put out a first professional album, “Teens of Style,” on October 30.