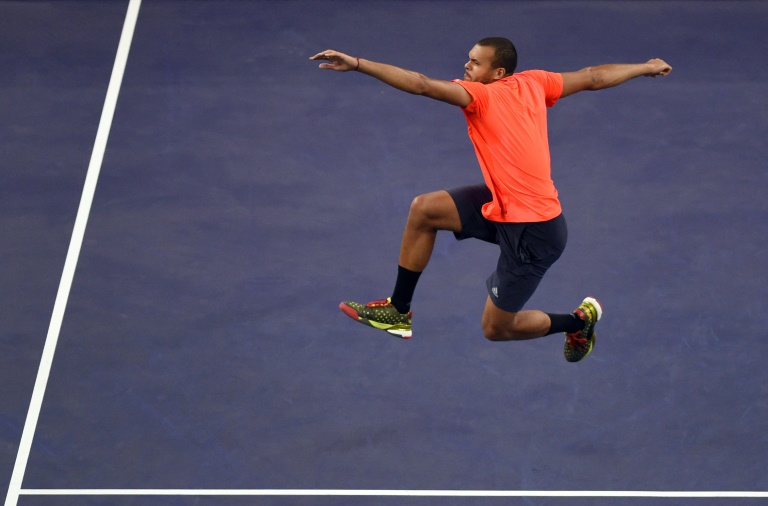 The mercurial Frenchman recovered from an embarrassing 6-0 ‘bagel’ in the second set to edge a thrilling decider, highlighted by his athletic diving volley to bring up match point.

The frustrated Nadal completely misread a backhand to give Tsonga the win, as the Spaniard narrowly failed to reach his second final in seven days after he was runner-up last week in Beijing.

Although Nadal will take encouragement from reaching the semis, after slipping to seventh in the rankings in a disappointing year, Tsonga will now celebrate one of his biggest wins of the season.

In Sunday’s final he will play either Novak Djokovic or Andy Murray, with the world number one and two set to play their blockbuster semi-final later.

At a packed Qi Zhong Stadium, Nadal slipped and fell in the very first game to hand Tsonga break points, and he misfired a routine smash in the fifth to give the Frenchman another opportunity.

The Spaniard’s serve had only been broken once all week but Tsonga finally pierced his armour when he sent back a towering Nadal forehand with interest for a smoking backhand winner.

Tsonga buried a huge crosscourt forehand as he fended off break points in the eighth game, and he didn’t hang around in his next service game which he won to love to take a one-set lead.

But Tsonga was all at sea in the second set and with double-faults at critical moments, Nadal broke three times to ‘bagel’ the Frenchman 6-0 and level the match.

Tsonga rediscovered his form for a tight deciding set and although he was unable to convert three break points in the third game, he finally broke for 6-5 when Nadal fired into the net.

Serving for the match, Tsonga dived full-length for a forehand volley and then got up to parry the scrambling Nadal’s reply and bring up match point, which the Spaniard lost tamely.