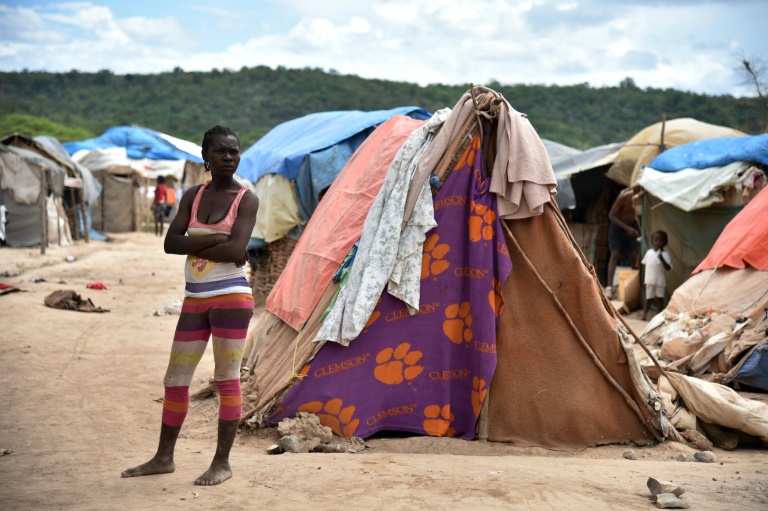 A stiff wind whips through the thin tree branches woven into a hut for Haitian Edline Joseph, and she covers her son’s face against all the dust that’s kicked up.

Joseph has grown used to this kind of misery since fleeing back to Haiti from the neighboring Dominican Republic.

The young woman with drawn facial features had been living in the Dominican Republic illegally for 10 years.

She feared getting picked up and expelled by the army as the Dominican Republic tightened its immigrations laws.

So in June she left on her own and brought her three children to a barren expanse of land called Parc Cadeau 1, now home to more than 500 people.

Six such squatter camps have mushroomed outside the village of Anse-Ã -Pitres. The closest big towns are hours away by foot on rocky rural paths.

The change in Dominican law meant that children born there of undocumented foreigners — mostly Haitians — do not have Dominican citizenship.

Overnight, 250,000 people became stateless. The deadline for registering or facing deportation was June 17.

The two countries share the Caribbean island of Hispaniola. Both are poor, but Haiti much more so.

The legal change has forced thousands of people to leave the Dominican Republic for Haiti. In the six squatter camps like Parc Cadeau 1, the United Nations estimates more than 2,700 are scraping by.

They have built hovels from tree branches, worn sheets and pieces of plastic sheeting. But these shelters at Parc Cadeau 1 — cadeau is French for gift — do not protect them from the rain or the sun or the dust, which is everywhere.

“That is all we have to eat, the dust,” said Joseph as she held her three-year-old son, who suffers from glaucoma. His eyes are watery.

“He really suffers with the dust. Two weeks ago the doctor gave me some eyedrops for him but now I am told there is nothing else they can do,” Joseph said.

Hundreds of people at the camps are visited by doctors from the health ministry and four times a month by a medical team from a US NGO called Heart to Heart.

Men, women and children wait in a hut that serves as a temporary clinic.

A gust of wind tears away at plastic sheeting meant to reinforce a wall made of tree branches.

As dust swirls, everyone closes their eyes and covers their face until it settles. A nurse scrambles to keep her papers from flying away. A colleague covers up pills she had been handing out.

“A week after the start of the expulsions, our office decided we needed to come and start treating people,” said Ketia Lamour, a doctor who works for Heart to Heart.

“At the beginning we would see up to 150 people a day and leave the camp late in the evening. Now, as we are doing the follow up, we see about 40 people a day,” Lamour said.

One of the people waiting in line to be treated is Edilene Pierre-Paul, age 24. Her nine-day-old baby cries in her arms. She was eight months pregnant when she fled from the Dominican Republic.

“They said they were going to come into our homes and take us to prison. So before that could happen I came here,” said Pierre-Paul.

She was able to give birth in a small clinic in Anse-Ã -Pitres. But since her son was born he has lived covered in dust.

“I would like to leave but I do not have the means,” she said.

A few kilometers away, squatters in a camp called Savane Galata endure the same lack of drinking water and food.

But thanks to one generous man they are a lot better off than those at Parc Cadeau 1.

“In June, I saw six families who were fleeing from the Dominican Republic pass by my house,” said that man, David Lazare.

“I felt sorry for them, so I let them live around my house. In a matter of days they were living here on my land,” said Lazare.

A 49-year-old cabinet maker who has always lived in Anse-Ã -Pitres, Lazare is hosting 49 families and has provided them with bamboo to build huts.

The Dominican Republic is only 300 meters away from Lazare’s land. There are no guards in sight. To cross the border all you have to do is walk down a small hill.

But squatter Jean-Baptiste Medile said he will never again set foot in that country, where he lived for more than 40 years.

“Dominicans show no consideration for Haitians. They need us to work hard, to make money, but when a Haitian asked to be paid, he gets hit,” said 60-year-old Medile.